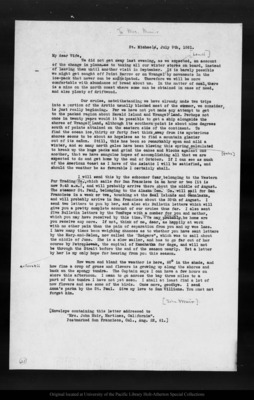 To mrs. MuirSt. Michael, July 9th, 1881.[Land]My dear Wife.We did not get away last evening, as we expected, on account of the change in plans-as to taking all our winter stores on board, instead of leaving them until another visit in September.It is barely possible we might get caught off Point Barrow or on Wrangell Land by movements in the ice-pack that never can be anticipated.Therefore we will be more comfortable with abundance of bread about us.In the matter of coal, there is a mine on the north coast where some can be obtained in case of need, and also plenty of driftwood.Our cruise, notwithstanding we have already made two trips into a portion of the Arctic usually blocked most of the summer, we consider, is just really beginning.For we have not yet made any attempt to get to the packed region about Herald Island and Wrangell Land. Perhaps not once in twenty years would it be possible to get a ship alongside the shores of Wrangell Land, although its southern point is about nine degrees south of points attained on the eastern side of the continent.To find the ocean ice, thirty or forty feet thick, away from its mysterious shores seems to be about as hopeless as to find a mountain glacier out of its can~on.Still, this has been so remarkably open and mild a winter, and so many north gales have been blowing this spring gales calculated to break up the huge packs and grind the cakes and blocks against one another, that we have sanguine hopes of accomplishing all that we are expected to do and get home by the end of October.If I can see as much of the American Coast as I have of the Asiatic I will be satisfied, and should the weather be as favorable I certainly shall.I will send this by the schooner Czar, belonging to the Western Fur Trading Co., which sails for San Francisco in an hour or two (it is now 9:45 a.m.) and will probably arrive there about the middle of August. The steamer St. Paul, belonging to the Alaska Com. Co. will sail for San Francisco in a week or two, touching at the Seal Islands and Unalaska, and will probably arrive in San Francisco about the 20th of August. I send two letters to you by her, and also six Bulletin letters which will give you a pretty complete account of our cruise thus far.I also sent five Bulletin letters by the TomPope with a number for. you and mother, which you may have received by this time.at We may, possibly, be home ere you receive any more. If not, think of me, dear, as happily at work with no other pain than the pain of separation from you and my wee lass. I have many times been weighing chances as to whether you have sent letters by the Mary-and-Helen, now called the "Rodgers", which was to sail about the middle of JuneShe is a slow sailor, and has to go far out of her course by Petropavlovskii, the capital of Kamchatka for dogs, and will not be through the Strait before the end of the season nearly. Yet a letter by her is my only hope for hearing from you this season.How warm and bland the weather is here, 60° in the shade, and how fine a crop of grass and flowers is growing up along the shores and back on the spongy tundra.The Captain says I can have a few hours on shore this afternoon.I mean to go across the bay three miles to a part of the tundra I have not yet seen.I shall at least find a lot of new flowers and see some of the birds. Once more, goodbye. I send Anna's parka by the St. Paul.Give my love to Sam Williams. You must not forget him.[John muir][Envelope containing this letter addressed to"Mrs. John Muir, Martinez, California".Postmarked San Francisco, Cal., Aug. 22, 81.]21