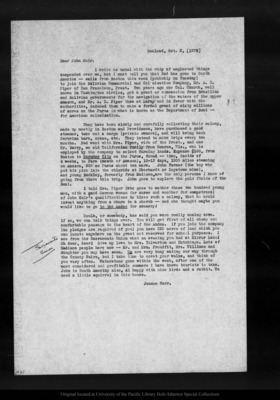 Oakland, Oct. 2, [1870]Dear John Muir:I write as usual with the whip of neglected things suspended over me, but I must tell you that Ned has gone to South America -- sails from Boston this week (probably on Tuesday) to join the Bolivian Commercial and Colonization Company, Mr. A. D.Piper of San Francisco, Prest. Two years ago one Col. Church, well known in Washington circles, got a grant or concession from Brazilian and Bolivian governments for the navigation of the waters of the upper Amazon, and Mr. A. D. Piper then at LaPaz and in favor with the authorities, induced them to make a formal grant of sixty millions of acres on the Purus in what is known as the Department of Beni--for American colonization.They have been slowly and carefully collecting their colony, made up mostly in Boston and Providence, have purchased a good steamer, take out a cargo (private owners), and will bring back Peruvian bark, cocoa, etc. They intend to make trips every two months. Ned went with Mrs. Piper, wife of the Prest., and one Mr. Barry, an old Californian family from Monroe, Wis., who is employed by the company to select farming lands. Expense $100, from Boston to Herndar City on the Purus, found -- time, inside of4 weeks, to Para (mouth of Amazon), 10-12 days, 1000 miles steaming on Amazon, 800 on Purus about ten more. John Turner (the boy who put his pick into the chloride at Eberhardt or Keystone mine), and young Beckley, formerly from Madison, are the only persons I know of going from there this trip. John goes to explore the gold fields of the Beni.I told Mrs. Piper (who goes to mother these two hundred young men, with a good German woman for nurse and another for sempstress) of John Muir's qualifications to bless such a colony, that he could invent anything from a churn to a cherub — and she thought maybe you would like to go to the Andes for scenery!Soulè, or somebody, has said you were really coming down. If so, we can talk things over. You will get first of all cheap and comfortable passage to the heart of the Andes. If you join the company (no pledges are required of you) you have 320 acres of land which you can locate anywhere on the grant not reserved for school purposes. I see from the Sacramento Union what an evening you had at Mirror Lake! Oh dear, dear! Give my love to Mrs. Yelverton and Hutchings. Lots of Madison people here now -- Mr. and Mrs. Proudfit, Mrs. Williams and daughter you may have seen. We are very busy eating our way through the County Fairs, but I take time to covet your walks, and think of you very often. Waterstone gone within the week, after one of the most considered and profitable summers I have known tourists to take.John is South Ameriky also, Al happy with nine birds and a rabbit. We need a little squirrel in this house.Jeanne Carr.