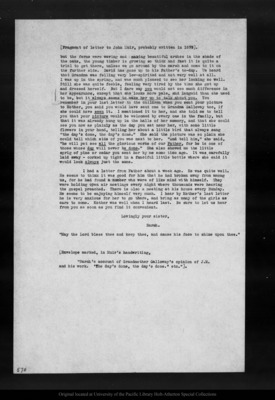 [Fragment of letter to John Muir, probably written in 1879].but the ferns were waving and making beautiful arches in the shade of the oaks, the young timber is growing so thick and fast it is quite a trial to get there, unless we go around by the marsh and come to it on the further side. David has gone up to his Father's to-day. We heard that Grandma was felling very low-spirited and not very well at all. I was up in the spring, and was much pleased to see her looking so well. Still she was quite feeble, feeling very tired by the time she got up and dressed herself. But I dare say you would not see much difference in her appearance, except that she looks more pale, and languid than she used to be, but it always seems to wake her up to talk about you. You remember in your last letter to the children when you sent your picture to Mother, you said you would have sent one to Grandma Galloway too, if she could have seen it. I mentioned it to her, and she told me to tell you that your picture would be welcomed by every one in the family, but that it was already hung up in the halls of her memory, and that she could see you now as plainly as the day you sat near her, with some little flowers in your hand, telling her about a little bird that always sang "the day's done, the day's done." She said the picture was so plain she could tell which side of you was next to her. "And tell him," she said, "he will yet see all the glorious works of our Father, for he is one of those whose day will never be done." She also showed me the little sprig of pine or cedar you sent her by me some time ago. It was carefully laid away - corked up tight in a fanciful little bottle where she said it would look always just the same.I had a letter from Father about a week ago. He was quite well. He seems to think it was good for him that he had broken away from among us, for he had found a number who were of like mind with himself. They were holding open air meetings every night where thousands were hearing the gospel preached. There is also a meeting at his house every Sunday. He seems to be enjoying himself very much. I hear by Mother's last letter he is very anxious for her to go there, and bring as many of the girls as care to come. Mother was well when I heard last. Be sure to let us hear from you as soon as you find it convenient.Lovingly your sister,Sarah."May the Lord bless thee and keep thee, and cause his face to shine upon thee."[Envelope marked, in Muir's handwriting,"Sarah's account of Grandmother Galloway's opinion of J.M.and his work.'The day's done, the day's done., etc."]