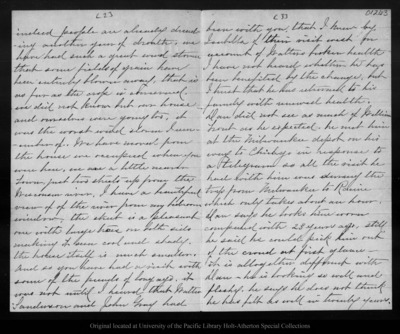 [2]indeed people are already dread- -ing another year of drouth, we have had such a great wood stove that some fields of grain have been entirely blown away, that is as far as the crop is [advanced?]. we did not know but our house and [ourselves?] were young too, it was the worst wind storm I rem- -ember of. We have moved from the house we occupied when you were here, we are a little nearer town, just two streets up from the [Wisconsin?] river, I have a beautiful view of of the river from my bedroom window, the street is a pleasant one with large [homes?] on both sides making it seem cool and shady. the house itself is much smaller. And so you have had a visit with some of the friends of long ago, it was not until I heard that Walter [Landenson?] and John Gray had01263 [3]been with you, that I knew by Isabella of their visit west for account of Walters broken health I have not heard whether he has been benefited by the change, but I trust that he has returned to his family with renewed health. Dan did not see as much of William [Lout?] as he expected. he met him at the Milwaukee depot on his way to Chicago in response to a telegram so all the visit he had with him was during the trip from Milwaukee to Racine which only takes about an hour,. Dan says he looks time [worn?] compared with 23 years ago, still he said he could pick him out of the crowd at first glance_ it is altogether different with Dan_ he is looking so well and fleshy, he says he does not think he has felt as well in twenty years.