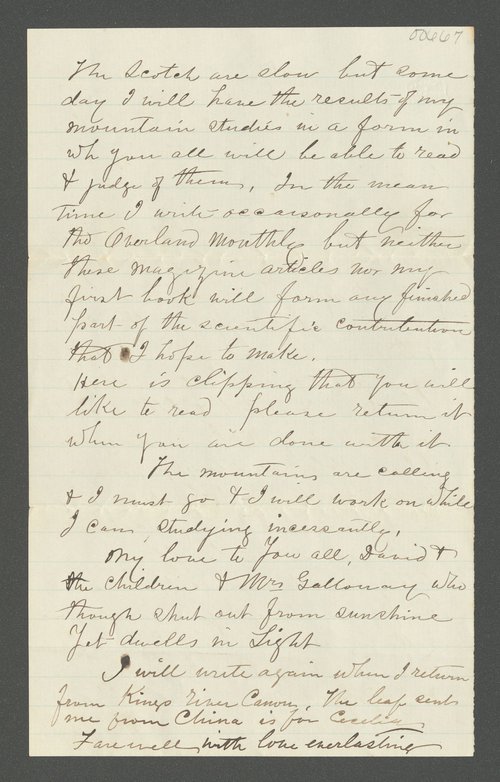 Why are the
mountains calling?

Atop a 13,000-foot Sierra peak, I asked a group of hikers about John Muir. One of them mentioned Muir’s desire
to protect nature. Another quoted Muir’s most famous line, “the mountains are calling and I must go!” But what did Muir really mean when he wrote that?
The University of the Pacific curates and shares the largest collection of Muir’s writings in the world. This is an excellent place to read from his essays, journals, and correspondence to decide for yourself the meaning of his words.
In 1873, Muir concluded a letter with, “The mountains are calling and I must go and I will work on while I can, studying incessantly.” How do you think the meaning of the word “calling” changes after reading the whole sentence?
In the rest of the letter, Muir suggests that he is struggling with writing. Perhaps the “calling” mountains are an excuse to go for a hike and not to write.
We invite you to examine what you read in his many writings, and consider how meaning shifts. Of course, you are always welcome to climb the highest peaks and shout whatever you like! 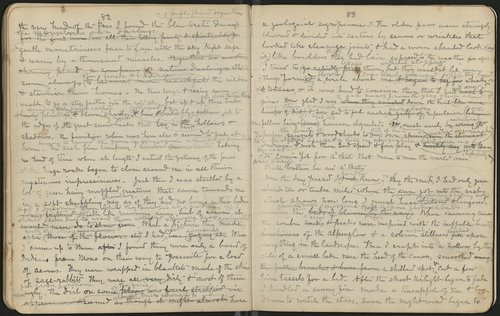 Muir was a master observer. He published scientific theories supported by a wide range of direct observation that challenged conventional wisdom about the natural world. His work motivated others to join him in visiting and protecting nature.

Despite his radical scientific observations, Muir likely held attitudes toward non-white people typical of his time as recorded in his brief, though derogatory writings about Blacks and indigenous people.

In the late summer of 1869, Muir crossed Mono Pass when he came upon a “band of Indians from [the] Mono” Lake area. He described them as “queer, hairy, muffled creatures,” and noted how they formed a “dismal circle” around him before he was able to “get away from the gray, grim crowd.” He felt sad that he had “desperate repulsion” for their “degraded” condition, but also wrote that all “men” shall be brothers and wished them Godspeed.

How does this resonate today? These words reveal that despite his ability to make groundbreaking observations of nature, his observations of peoples sometimes relied upon harmful attitudes about belonging, access, and power.

We invite you to examine his observations and learn to be a good observer by recognizing cultural biases as well as minimizing judgement based on race, gender, or socio-economic standing.

Draft notebook for My First Summer in the Sierra, volume 3, circa 1887