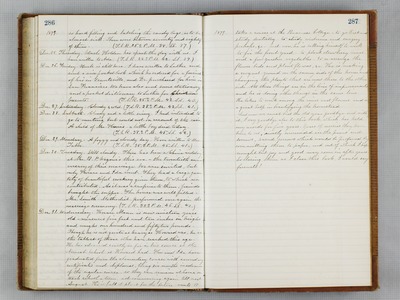 1879. so hard filling and labeling the candy bags, as to be almost sick. There were between seventy and eighty of them. (T.S.R. 25. 2 P.M. 38. S.S. 37.) Dec. 25. Thursday. Uncle Holden has spent the day with us. I have written to Ada. (T.S.R. 28. 2 P.M. 42. S.S. 39.) Dec. 26. Friday. Uncle is still here. I have written to Luther and sent a nice pocket book which he ordered for a friend of his in Grantsville, and Dr. purchased for him in San Francisco. We have also sent some stationery and a pocket dictionary to Luther for Christmas presents. (T.S.R. 25. 2 P.M. 42. S.S. 40.) Dec. 27. Saturday. Cloudy & cold. (T.S.R. 28. 2 P.M. 42. S.S. 41.) Dec. 28. Sabbath. Cloudy and a little rainy. I had intended to go to meeting but could not on account of the rain. A child of Mr. Harris - a little boy died today. (T.S.R. 38. 2 P.M. 45. S.S. 42.) Dec. 29. Monday. A foggy and cloudy day. Have written to Mrs. Tabor. (T.S.R. 35. 2 P.M. 45. S.S. 41.) Dec. 30. Tuesday. Still cloudy. There has been a china wedding at Mr. B. P. Wagner's this eve. - the twentieth anniversary of their marriage. We were invited, but only Horace and Ida went. They had a large quantity of beautiful crockery given them, to which we contributed. As it was a surprise to them, friends brought the supper. The house was well filled. Mr. Smith - Methodist - performed over again the marriage ceremony. (T.S.R. 33. 2 P.M. 46. S.S. 40.) Dec. 31. Wednesday. Horace Mann is now nineteen years old - measures five feet and ten inches in height and weighs one hundred and fifty two pounds. Though he is not quite as heavy as Howard was, he is the tallest of those who have reached this age. He has advanced exactly as far in his course at the Normal School as Howard had. He and Ida have graduated from the elementary course with secondary certificates and diplomas, being six months in advance of the regular course, so they can remain at home or teach school a term, not commencing again till next August. He is fall of plans for the future - wants to 1879. take a course at the Business College - to go East and study dentistry - to study medicine and surgery perhaps, etc. Just now, he is setting himself to work to fix the front yard - to plant strawberry vines and a few garden vegetables - to re-arrange the flower beds and plant flowers, etc. He is making a croquet - ground on the sunny side of the house and changing the plants that are now there to the other side. All these things are in the line of improvements and he is doing other things in the same line. He likes to work among the vines and flowers and is a great help in beautifying the homestead. And now we must bid the old year good bye and with it, I say goodbye also to this book, which has held my records for five years. Years of mercies they have been to us, mostly unrecorded are the pains and sorrows, sacred sorrows which would be profaned by committing them to paper, and out of which I hope nought but joy and good may come in after years. So closing them as I close this book, I would say farewell!