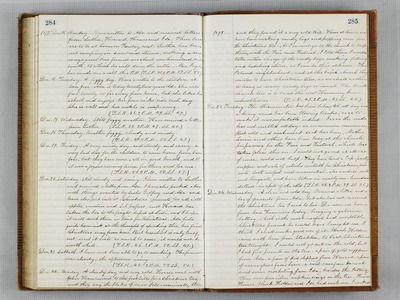 1879. Dec. 15. Monday. Have written to Ada and received letters from Luther, Howard, Horace and Ida. These last are to be at home on Friday next. Luther has been out camping in snow and storms, seeking a new range and has found one about one hundred miles south, to which he will drive the cattle. Mrs. Inglis has made me a call this P.M. (T.S.R. 40. 2 P.M. 59. S.S. 55.) Dec. 16. Tuesday. A foggy day. Have written to the children at San Jose. Ada is today twenty two years old. She will feel lonely so far away from home, but she likes her school and enjoys her four miles ride each day. She is well and her ankle is improving. (T.S.R. 41. 2 P.M. 49. S.S. 47.) Dec. 17. Wednesday. Still foggy weather. Have received a letter from Luther. (T.S.R. 39. 2 P.M. 47. S.S. 46.) Dec. 18. Thursday. Weather foggy, cloudy and windy. (T.S.R. 42. 2 P.M. 51. S.S. 47.) Dec. 19. Friday. A very windy day, and cloudy and rainy - a very bad day for the children to come home from San Jose, but they have come, all in good health, and O, it was a joyous coming home for them and for me. (T.S.R. 55. 2 P.M. 58. S.S. 57.) Dec. 20. Saturday. Still cloudy and rainy. I have written to Luther and received a letter from Ada. I have also packed a box with things wanted by Sister Geffroy and Ada and have also put into it Christmas presents for all, with apples, candies and S.S. papers, and Howard has taken the box to the freight depot at Lode', and I hope it will reach them in time for Christmas. Ada feels quite homesick at the thought of spending this, her first Christmas away from home. But her school is only half out, and it costs so much to come, it would not be worth while. (T.S.R. 46. 2 P.M. 50. S.S. 47.) Dec. 21. Sabbath. I have not been able to go to meeting. The forenoon was cloudy, the afternoon rainy. (T.S.R. 42. 2 P.M. 52. S.S. 50.) Dec. 22. Monday. A cloudy day and very cold. Horace went with John Hammond to the foot hills for a Christmas tree, and they say the flakes of snow fell occasionally there, 1879. and they found it a very cold trip. Here at home, we have been making candy bags and popping corn for the Christmas tree. As I cannot go to the church to help them with the Fair and Festival, I told them I would take entire charge of the candy bags, making, felling and labeling them, as I can do this at home. The Poland neighborhood, and at the brick church they are also to have Christmas trees, so we shall not have to hang as many candy bags as usual. The brick church tree is to be at the new Harmony Grove schoolhouse. (T.S.R. 43. 2 P.M. 47. S.S. 45.) Dec. 23. Tuesday. The thermometer has been below 40º all day and a heavy wind has been blowing besides, so as to make it uncomfortable indeed. Ice in the roads has not melted all day - an uncommon occurrence. But cold and inclement as it has been, Mother, Susie and others have been busy at the church preparing for the Fair and Festival, which has taken place this eve. I could not go out at all - so of course, could not help. They have had a Cap-party, supper and sale of articles suitable for Christmas presents, both useful and [?], also candies, unto and bouquets, and have taken in nearly one - hundred dollars - in spite of the cold. (T.S.R. 32. 2 P.M. 39. S.S. 36.) Dec. 24. Wednesday. A clear and cold day. Received a letter and a box of presents from Ada, but she has not received the Christmas box I sent to her. Dr. arrived home from San Francisco today, bringing a galvanic battery, which is the most useful and acceptable Christmas present he could have brought me. I think I shall make good use of it. Uncle Holden came with him from Stockton, to be at Christmas tree tonight. I could not go out in the cold, but I had five presents on the tree - a pair of gold cuffpins from Ada, a pair of kid slippers from Howard, a pair of warm gloves from Susie, a card - case from Hannah and some crocheting from Ida, besides the battery. There were four silver napkin sings on the tree, Howard Horace, Uncle Holden and Ida had each one. I worked.