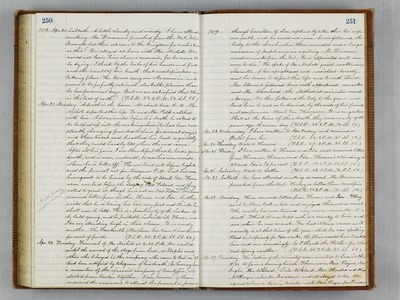 1879. Apr. 20. Sabbath. A little cloudy and windy. I have attended meeting. Mr. Dinsmore preached from the text, "Who knowest but then ant come to the kingdom for such a time as this?" Dr. stayed at home with Mr. Nichols. We could not leave him alone a moment, for he seems to be dying. I think by the looks of his hands and feet and the smell of his breath, that mortification is taking place. He knows every one who comes in, and seems to be perfectly rational, also talks plainer than he has for several days. But we are satisfied that this is "the last of earth." (T.S.R. 53. 2 P.M. 63. S.S. 56.) Apr. 21. Monday. "A death in the house." At about two, A. M. Mr. Nichols departed this life. Dr. and Mr. Polk watched with him. A few minutes before his death, he asked to be helped up into the rocking chair (he has been constantly changing from bed to chair for several days) and there he sat and breathed his last so quietly that they could hardly tell when the end came. After all his pain, I am thankful that he had a quiet death, and is now, no doubt, to use his own words, "where he is better off." He was laid out before light and the funeral set for tomorrow P.M. Last Sat. eve. his request to be buried by the side of Uncle Geo. Thom a son was laid before the Lodge of Odd Fellows and they voted to grant it, though he is not an Odd Fellow. *(locally) *was formerly a member in Newton, Mass. We have received letters from Luther, Horace and Ida. Luther writes that he is losing his hair very fast and thinks he shall soon be bald. This is a peculiarity of the Lockes - to be bald young, and he probably inherits it. Horace and Ida are standing high in their classes. It is windy weather. The Grantsville (Nev.) Sun has been discontinued for want of funds. (T.S.R. 45. 2 P.M. 66. S.S. 60.) Apr. 22. Tuesday. Funeral of Mr. Nichols at 2:30 P.M. We waited until the arrival of the stage from Lodi, as Staples and others who belonged to the company who came to Cal. in 49 had been notified by telegram of his death, he having been a member of the aforesaid company of twenty five, who started from Boston together. None, however, of them answered the sermons to attend the funeral in person 1879. though Sweetser, of Sac. replied by letter that his wife was feeble, and he could not come. So we followed the body to the church, where three ministers and a large concourse of people were in waiting. Mr. Dinsmore made remarks from the text, "It is appointed unto men once to die." He spoke of Mr. Nichols quiet, unobtrusive character, of his uprightness and consistent honesty, and his desire to depart this life and be with Christ. Mr. Stewart followed him with appropriate remarks and Mr. Cleveland the Methodist minister made a prayer. We then followed the body to the grave, and laid him to rest, as he desired, by the side of his friend and companion - Uncle Geo. Thomason. It is singular that at the time of their death, they were nearly of the same age. A warm day. (T.S.R. 44. 2 P.M. 74. S.S. 67.) Apr. 23. Wednesday. I have written to Ada today, and received a Postal from her. (T.S.R. 50. 2 P.M. 81. S.S. 72.) Apr. 24. Thursday. Wrote to Howard. (T.S.R. 57. 2 P.M. 86. S.S. 75.) Apr. 25. Friday. I have written to Horace and Ida, and received letters from Howard, Horace and Ida. Horace's standing is 88 and Ida's 94 percent. (T.S.R. 54. 2 P.M. 83. S.S. 70.) Apr. 26. Saturday. Wrote to Luther. (T.S.R. 48. 2 P.M. 78. S.S. 68.) Apr. 27. Sabbath. We have attended meeting as usual. Mr. Dinsmore preached from the text, "To obey is better than sacrifice." (T.S.R. 50. 2 P.M. 79. S.S. 72.) Apr. 28. Monday. Have received letters from Horace and Ida. They went to Alum Rock on Sat. and enjoyed themselves much. The weather has now turned very warm - since Mr. N.'s death. I think it was kept cool, as a mercy to him and me, while he was so sick. For had it been warm as it usually is, at that time of the year, while he was spitting blood so profusely for two weeks, the flies would have trouble him and me exceedingly. So I thank the Father for the cool Spring weather. (T.S.R. 56. 2 P.M. 81. S.S. 68.) Apr. 29. Tuesday. The ladies of the vicinity were invited to Susie's this P.M. to form a Sewing Circle. There were Mrs. Rogers, Mrs. Inglis, Mr. McCloud, Lula McCloud, Mrs. Olmeted and Miss McKenzie, also Mr. Dinsmore, and all stayed to tea. We agreed to have a Sewing Circle, with Mrs. Rogers for President