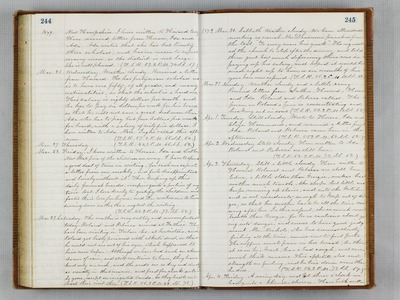 1879. New Hampshire. I have written to Howard today Have received letters from Horace, Ida and Ada. Ada writes that she has but twenty three scholars, and has no reason to expect many more, as the district is not large. She is well pleased. (T.S.R. 57. 2 P.M. 74. S.S. 67.) Mar. 26. Wednesday. Weather cloudy. Received a letter from Howard. He has forty seven scholars and is to have over fifty, of all grades, and many nationalities, so that the school is a hard one. His salary is eighty dollars per month, and he has to pay six dollars per week for his board, so that he will not save a great deal more than Ada who has to pay but four dollars per week for board, with a salary of sixty five dollars. I have written to Ada. Mrs. Inglis called this afternoon. (T.S.R. 57. 2 P.M. 65. S.S. 64.) Mar. 27. Thursday. (T.S.R. 48. 2 P.M. 66. S.S. 62.) Mar. 28. Friday. I have written to Horace, Ida and Luther. Now that five of the children are away. I have to spend a good deal of time in writing, for each one expects a letter from me weekly, and feels disappointed and lonely without it. Then keeping up this daily Journal besides, occupies quite a portion of my time. But I love dearly to gratify the children and foster their love for home, and Dr. wishes me to hire sewing done rather than neglect the writing. (T.S.R. 48. 2 P.M. 73. S.S. 68.) Mar. 29. Saturday. The weather is very sultry and uncomfortable today. Roland and Rebecca arrived at Father's. They have been visiting in Tulare Co. at her sister's, and Roland got badly poisoned with alkali dust, so that he could not see out of his eyes, which happened to him once before. Although we have had such an abundance of rain, and still continue to have, they have had only an inch, and the roads are as dry and dusty as usually in the summer, and feed for stock entirely gone, except on irrigated lands. So they had to cut short their visit there. (T.S.R. 56. 2 P.M. 82. S.S. 78.) 1879. Mar. 30. Sabbath. Weather cloudy. We have attended meeting as usual. Mr. Dinsmore preached from the text. "To every man his work." He requested the church to stop after the service, and told them just how much deficiency there was in paying up his salary, and hoped it would be made right up to him, as six months of his year have now expired. (T.S.R. 56. 2 P.M. 68. S.S. 62.) Mar. 31. Monday. Weather cloudy and a little rainy. Received letters from Luther, Howard, Horace and Ida. Roland and Rebecca called. The poison on Roland's face is concentrating and breaking out in sores. (T.S.R. 50. 2 P.M. 62. S.S. 58.) Apr. 1. Tuesday. Still cloudy. Wrote to Horace, Ida and Eliza Hammond, and received a letter from Ada. Roland and Rebecca came here in the afternoon. (T.S.R. 55. 2 P.M. 68. S.S. 62.) Apr. 2. Wednesday. Still cloudy. Have written to Ada. Roland and Rebecca are still here. (T.S.R. 58. 2 P.M. 73. S.S. 63.) Apr. 3. Thursday. Still a little cloudy. Have written to Howard. Roland and Rebecca are still here. Edna, a little older than Georgic, makes her mother much trouble. She sleeps but little and keeps running up stairs, and into the kitchen and is not considerate enough to keep out of danger, so that her mother has to be all the time running after her. In this respect, she is much more trouble than Georgic, for he is cautions about going into danger, and seems to have good judgment. Mr. Nichols, who has seemed slowly failing all the time, seems now to fail faster. He suffers much pain in his breast, he think it is in his heart, has a bad cough, and raise much thick mucous. His appetite also and strength are failing, and he lies down more than he did. (T.S.R. 54. 2 P.M. 73. S.S. 67.) Apr. 4. Friday. A rainy day, and at three o'clock we had quite a thunder shower. Have both written