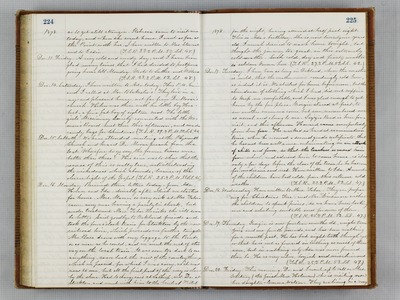 1878. as to get still stronger. Rebecca came to visit me today, and when she went home. I went as for as the Point with her. I have written to Mrs. Stewart and to Eddie. (T.S.R. 33. 2 P.M. 50. S.S. 48.) Dec. 13. Friday. A very cold and windy day, and I have been glad many times, that I had decided to postpone going home till Monday. Wrote to Luther and Willard. (T.S.R. 23. 2 P.M. 53. S.S. 48.) Dec. 14. Saturday. I have written to Ada today. This P.M. Eunice and I called at Mr. Blakeslee's. They live in a new and pleasant house, not far from Dr. Mooar's church. Helen was there with her little boy Herbert - a fine fat boy of eighteen mos. The little girls Missionary Society connected with the Woman's Board met there this afternoon, and made candy bags for Christmas. (T.S.R. 29. 2 P.M. 50. S.S. 44.) Dec. 15. Sabbath. We have attended meeting at the Plymouth Church and heard Dr. Mooar preach from the text, "Where fore do ye say, the former times were better than these? "His aim was to show that the reverse of this is really true, notwithstanding the wickedness which abounds, because of the clearer light of the Gospel. (T.S.R. 25. 2 P.M. 51. S.S. 46.) Dec. 16. Monday. Received three letters today - from Ada, Horace and Ida - directly after which we started for home. Mrs. Mann is very sick at Mrs. Tabor's came very near having a paralytic shock, but under treatment Mrs. Tabor thinks she will soon be better. Said goodbye to Oakland friends and took the four o'clock train for Stockton by the new railroad line, which proceeds no farther tonight Mr. Burr drove with my baggage to the Point, or as near as he could, and we went the rest of the way on the local train. It was soon too dark to see anything, so we lost the view of the country through which we passed, for which I was sorry, as it was new to me, but all the first part of the way is close by the shore. Had to change cars at Lathrop, met Dr. at Stockton, and went with him to the Central Hotel 1878. for the night, having arrived at half past eight. This is Ada's birthday. She is now twenty one years old. I much desired to reach home tonight, but thought the journey too great, in this extremely cold weather. Such cold, dry and frosty weather is seldom known here. (T.S.R. 27. 2 P.M. 53. S.S. 42.) Dec. 17. Tuesday. I have been so long in Oakland, when the weather is mild, that the weather seems exceedingly cold here, as indeed it is. We started for home before noon, but the abundance of clothing which I had, did not suffice to keep me comfortable, and I was glad enough to get home by the fire-place. Georgie stared at first, to see another mamma come, but soon remembered me as usual, and clung to me. Lizzie Read is here for a visit, and this afternoon Howard came unexpectedly from San Jose. He worked so hard at examination time, when he received a second grade certificate, that he has not been well since, culminating in an attack of skills and fever, so that the teachers excused him from school, and advised him to come home, as it is only a few days before the close of the term, So he has come for medicine and rest. Have written to Ida. A number of the children have bad colds, from this extreme cold weather. (T.S.R. 23. 2 P.M. 52. S.S. 47.) Dec. 18. Wednesday. Have written to Mrs. Tabor. They are preparing for Christmas Tree, and Mr. Dinsmore wishes the children to speak pieces, so we have been looking over and selecting suitable ones for some of them. (T.S.R. 25. 2 P.M. 52. S.S. 47.) Dec. 19. Thursday. Georgie is now fourteen months old, weighs twenty six and one-fourth pounds, and has been walking for a month past. He has but eight teeth through yet, so that he is not as forward in teething as most of them were, but in walking only Ada was more forward than he. He is very active, boyish and mischievous. (T.S.R. 25.2 P.M. 53. S.S. 49.) Dec. 20. Friday. This morning, Dr. and I went up to call on Mrs. Whitney (the first Mrs. Holman) who is visiting now her daughter - Emma Watson. They are living in a very