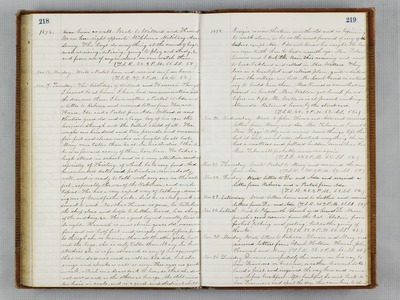 1878. hear him as well. Wrote to Willard and Hannah. We are here right opposite McClure's Military Academy. The boys do every thing at the sound of bugle such as rising, retiring, going to play and study, etc. and from one of my windows we can watch them. (T.S.R. 42. 2 P.M. 66. S.S. 58.) Nov. 18. Monday. Wrote a Postal home and received one from home. (T.S.R. 47. 2 P.M. 64. S.S. 58.) Nov. 19. Tuesday. The birthdays, of Willard and Hannah. Though I cannot be at home I have had communication with the dear ones there. I have written a Postal to Ada and a letter to Rebecca and received letters from Howard, Horace, Ida and a Postal from Ada. Willard is now thirteen years old and is a large boy of his age, the heaviest though not the tallest child of all. He weighs one hundred and two pounds and measures four feet and eleven inches in height. So all but Mary were taller than he is. In his studies, I think he is as forward as any of them have been. He takes a high stand in school and is a very attentive reader especially of History, of which he is very fond. And he remembers dates and particulars remarkably well, and is ready to talk with any one on the subject, especially the war of the Rebellion, and such topics. He has a very rapid way of talking, reminding me of Grand father Locke. And he is also quick and smart to work. Now that Horace is gone, he butchers the sheep alone and helps to butcher beeves, has charge of the milking, etc. He is a good boy and usually tries lode right. Hannah is now eleven years old, measures four and one-half feet and weighs seventy five pounds. So though she is heavier than all the other girls, but not the boys, she is only taller than Mary In her studies she is as far advanced as any of her age, except that she does not read as well as Ada did, but she sings and speaks as well as any. Her eyes are quite weak, which are a draw back to her, so that she does not sew as well as the others at her age. She still wears her hair in curls, and is a good and obedient child. Georgie is now thirteen months old and is beginning to walk alone, so he is the most forward of any of the babies except Ada. I do not know his weighs. He has no more teeth than he had a month ago. Mrs. Tabor, Eunice and I took the train this morning and went to East Oakland and called on Mrs. Wallace. They live in a beautiful and retired place, quite a distance from the village, on a hill, Mr. Saml. Baird is intending to build near them, Mrs. Baird is somewhat improved in health. Mrs. Wallace got lunch for us before we left Mr. Wallace is at present working in Alameda. Returned home by the street cars. (T.S.R. 45. 2 P.M. 63. S.S. 55.) Nov. 20. Wednesday. Wrote to John, Horace and Ada and received letters from Mary and Ada. Mrs. Tabor and I went to Mrs. Fogg's to try and recover some things left there but it isn't much use, she steals everything she can has a mattress and pillows hidden somewhere that Mrs. Tabor will probably never see again. (T.S.R. 44. 2 P.M. 65. S.S. 58.) Nov. 21. Thursday. Wrote Postal to Mary and received the same from Ada. (T.S.R. 45. 2 P.M. 67. S.S. 59.) Nov. 22. Friday. Wrote letters to Dr. and Ada and received a letter from Rebecca and a Postal from Ada. (T.S.R. 46. 2 P.M. 63. S.S. 54.) Nov. 23. Saturday. Wrote letters home and to Luther and received letters from Dr. and Ada. (T.S.R. 40. 2 P.M. 61. S.S. 50.) Nov. 24. Sabbath. Went to Plymouth Church and heard Dr. Mooar preach a good sermon from the text, "Abstain from foolish talking and jesting, but rather giving of thanks." (T.S.R. 33. 2 P.M. 50. S.S. 48.) Nov. 25. Monday. Wrote letters to Rebecca, Horace and Mary, and received letters from Uncle Holden, Horace, John Hannah and Mary. (T.S.R. 38. 2 P.M. 62. S.S. 48.) Nov. 26. Tuesday. Dr came unexpectedly this morn. on his way to San Francisco on business, or rather he went to Roland's first and inquired the way here and came over before breakfast. After breakfast he went back to San Francisco and spent the day, then came here to spend