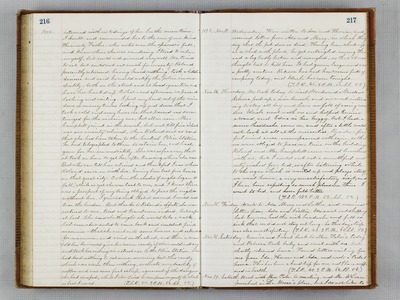 1878. returned with no tidings of her. In the mean time, I knelt and commended her to the care of our kind Heavenly Father, who notes even the sparrow's fall, and knew where she was wandering. I tried to calm myself, but could not succeed very well. We tried to eat, but could not eat much for anxiety. Roland presently returned having heard nothing, took a little dinner and said he would notify the police immediately, both on the street and at head - quarters, and have her hunted up. O what a sad afternoon we passed looking and waiting. I put my head out of the windows so many times looking up and down that I took a cold and every horse car that passed was scrutinized for the missing one, but all in vain. Mr. Campbell joined in the search, but not till five o'clock was our anxiety relieved, when Roland sent us word that she had been taken to the Central Police Station, he had telegraphed to them to retain her, and had gone for her immediately. She was so far away that it took an hour to get her after knowing where she was. But who can tell how relieved and thankful I was when Roland came in with her, having been lost five hours in that great city. O when the shades of night began to fall, while as yet she was lost to me, and I knew there was a prospect of my being obliged to pass the night without her, I grew so sick that it seemed I could not bear the burden. But thanks to Roland's efforts, she was restored to me, tried and travel worn indeed, but saps at last. She said she thought she would take a walk, but soon she wanted to come back and couldn't find mamma - that she went into some houses and asked for mamma, and cried on the street, and then a man told her he would give her some candy if she would not cry and took her siding in a street car to the Police Station. She had had nothing to eat since morning but this candy which was worse than nothing, so she ate very heartily of supper and was soon fast asleep, ignorant of the dangers she had escaped, while I also tried to compose myself to sleep as best I could. (T.S.R. 50. 2 P.M. 62. S.S. 55.) 1878. Nov. 13. Wednesday. Have written to Ada and Horace, and received letters from Ada and Mary, in which they say that the pet deer is dead. Having been shut up in a shed with plows, he got entangled among then and a leg badly broken and mangled, so that it was thought best to kill him. It had grown large and was a pretty creature. Rebecca has had her rooms full of company today, and Uncle has come tonight. (T.S.R. 46. 2 P.M. 60. S.S. 55.) Nov. 14. Thursday. We took today to visit Woodward's Gardens. Rebecca put up a nice lunch and we went intending to stay all day and have our fill of seeing wonders. Uncle went with us and helped Eunice around, and Edna in her buggy, but I had a severe headache come on, and after a little could not look at all at the curiosities. Besides a fearful wind arose, accompanied with rain, so that we were obliged to pass our time in the buildings Roland and Mr. Campbell came in and lunched with us, but I could not eat a mouthful and only wished for a bed, so after listening awhile to the organ which is wound up and plays itself we went home, a very unsatisfactory visit, and I have been expecting so much pleasure there. I went to bed, and soon felt better. (T.S.R. 48. 2 P.M. 63. S.S. 52.) Nov. 15. Friday. Wrote to Ada, Mary and Luther, and received letters from Ada and Willie. We went out shopping but Eunice had the sick headache and felt so sick that we did not stay out long. So this day's trip was also unsatisfactory. (T.S.R. 40. 2 P.M. 60. S.S. 50.) Nov. 16. Saturday. Eunice and I went back to Mrs. Tabor's today and Rebecca took baby and went with us, but shortly returned home. Found letters waiting for me from Ida, Horace and Ada, and wrote a Postal home. This has been a had trip for me, and I have suffered in health. (T.S.R. 40. 2 P.M. 62. S.S. 58.) Nov. 17. Sabbath. Went with Mrs. Tabor to meeting, and Mr. Mclean preached in Dr. Mooar's place, but I do not like to