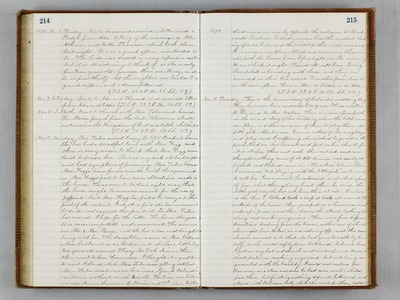 1878. Nov. 8. Friday. Wrote home and received a letter and a Postal from Ada, telling of the marriage of Allen Atheam and Belle Thomson which took place last night. It was a grand affair, or intended to be. The bride was dressed in a very expensive costume but it is all sickening to think of, as she is only fourteen years old, younger than our Mary, and he is past thirty. All the neighbors were treated to a grand supper, and a dance followed. (T.S.R. 42. 2 P.M. 65. S.S. 59.) Nov. 9. Saturday. Wrote to Ada and Howard and received letters from Ada and Eddie. (T.S.R. 39. 2 P.M. 64. S.S. 59.) Nov. 10. Sabbath. Went to church with Mrs. Tabor and heard Dr. Mooar preach from the text, "Whosoever shall not receive the kingdom of God as a little child," etc. (T.S.R. 40. 2 P.M. 64. S.S. 59.) Nov. 11. Monday. Mrs. Tabor moved today to 485 Prospect Avenue. She has had a dreadful time with Mrs. Fogg, and there is every reason to think that Mrs. Fogg even tried to poison her. She was very sick all last night and had symptoms of poisoning. Mrs. Tabor leased Mrs. Fogg's house for six months, with the agreement on Mrs. Fogg's pact to have some alterations made in the house. These were to be done right away, that the house might be more convenient for the use of patients. But Mrs. Fogg has failed to carry out this part of the contract. Indeed we find she has no means to do it, and cannot therefore do it. So Mrs. Tabor has moved, I hope, for the better. The house she goes to is more comfortable and convenient. The owners are Mr. & Mrs. Burr, and she has a son and daughter living with her. The daughters' name is Mrs. Willard whose husband is in Bodie, and she has a little boy two years old named Harry. We took dinner there, then went to San Francisco. I thought it a good time to visit Roland, while Mrs. Tabor was getting settled. Mrs. Tabor went over on business. I found Roland's residence without much trouble. He lives over Sullivan grocery store, on the corner of Mission and 11th where Ridley 1878. street comes in, nearly opposite the entrance to Woodward's Gardens. Indeed, we can hear the constant barking of a sea lion, and the noises of other wild animals. It is a very noisy place. Street cars run every three minutes past the house, from before light in the morning to one o'clock at night. Found all well here. Irving Campbell is boarding with them, and they are crowded in their two rooms. Two other families live on the same floor. Have written to Eddie and Ada. (T.S.R. 39. 2 P.M. 67. S.S. 58.) Nov. 12. Tuesday. This is the anniversary of Roland's wedding day. They have now been married two years. Have written to Dr. and to Mrs. Wallace. There is a nice open porch in the second story of this building where the little ones can play, and there are seven of them to play there, all little girls. About noon, Eunice asked if she might go and play, and I supposing she wished to go out on the porch, tied on her bonnet and put on her shawl, for it is all open thus and cool. She went out, and we thought nothing more of it till dinner was ready at 1 o'clock and Roland came in. He asked, "Where is Eunice I answered, "Out playing with the little girls," so he went to call her. In a moment he returned, and what a pang of fear shot through my heart when he said, "the little girls say she has not been there at all." O where is she then? Roland took a rapid look all around the outside of the house, then jumped on a horse car and rode up a price, and then down the street, looking all along and making inquiries. Then were five different directions leading from the house, either one of which she might have taken in wandering off, and the conclusion seemed to be that she had gone to walk by herself, as she could safely do in Oakland, but not here. I put on my hat and shawl and went up and down a short distance making inquiries, but not being acquainted with the locality, I could not venture for. Our man in a store was sure he had seen such a child pass there, but finding nothing definite, I returned, and stayed with Rebecca's baby while she went farther, but she