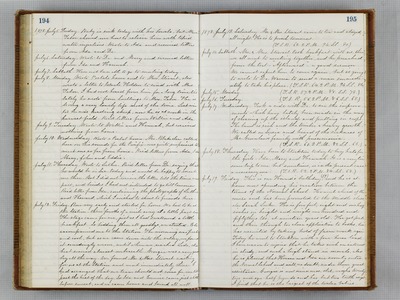 1878. July 5. Friday. Baby is sick today with his bowels, but Mrs. Tabor showed me how to relieve him with tepid water injections. Wrote to Ada and received letters from Ada and Dr. July 6. Saturday. Wrote to Dr. and Mary and received letters from Ida and Hannah. July 7. Sabbath. Have not been able to go to meeting today. July 8. Monday. Wrote Postals home and to Mrs. Stewart, also wrote a letter to Uncle Holden to send with Mrs. Tabor. I had not heard from him for a long time till lately he wrote from Snellings to Mrs. Tabor. He is living a very lonely life most of the time. Last winter he was herding sheep, now he is at work in the harvest field. Reid letters from Willie and Ada. July 9. Tuesday. Wrote to Willie and Hannah, but received nothing from home. July 10. Wednesday. Wrote a Postal home. Mr. Blakeslee called here on his rounds for the Pacific - was quite surprised to meet me so far from home. Reid letters from Ada, Ida Mary, John and Eddie. July 11. Thursday. Wrote to Luther. Reid letter from Dr. saying that he would be in Sac. today and would be happy to meet me there. But I did not receive the letter till the time was past, and besides I had not intended to go till tomorrow. Reid letter from Ida, containing the photographs of Luther and Howard, which I wished to show to friends here. July 12. Friday. Rose very early and started for home. We had to be at the Station - three fourths of a mile away at a little past six. The stage came for me, just as I had swallowed a little breakfast. So bidding them all goodbye, we started. Eli accompanied me to the Station. The morning was fresh and cool, but as we came down into the valley, we found it exceedingly warm, until when we reached Lodi, the heat seemed almost unbearable. Georgic was a very good boy all the way. We found Mr. & Mrs. Stewart waiting for us at the Station and went immediately there. I had arranged that our team should not come for me till past the heat of the day. So Ida and Eunice came just a little before sunset, and we came home and found all well. 1878. July 13. Saturday. Mr. & Mrs. Stewart came to tea and stayed all night. He is to preach tomorrow. (T.S.R. 62. 2 P.M. 94. S.S. 80.) July 14. Sabbath. Mr. & Mrs. Stewart took breakfast with us, then we all went to meeting together, and he preached from the text. "Afterward," a good sermon. We cannot expect him to come again, but is going to write to Dr. Warren to send a man immediately to take his place. (T.S.R. 64. 2 P.M. 94. S.S. 84.) July 15. Monday. (T.S.R. 57. 2 P.M. 88. S.S. 78.) July 16. Tuesday. (T.S.R. 56. 2 P.M. 86. S.S. 68.) July 17. Wednesday. Took a ride with Dr. to see the improvements which have lately been made in the way of clearing up the island and putting in crops. The land is rich and the timber a heavy growth. We called on Susie and heard of the sickness of Mr. Greenlaw's family with pneumonia. (T.S.R. 60. 2 P.M. 82. S.S. 66.) July 18. Thursday. Have been to Stockton today to buy hats for the girls Ida, Mary and Hannah. It is a very tire some trip to me, but sometimes, as in the present case a necessary one. (T.S. R. 52. 2 P.M. 84. S.S. 68.) July 19. Friday. This is our Howard's birthday (19), and he is at home now spending his vacation between the terms of the Normal School. He went ahead of the course and has been promoted to the Middle class, also Sarah Locke. He is five feet, eight and one half inches in height and weighs one hundred and fifty three lbs. at nineteen years old. He got pale and thin through too close application to books, but has recruited by taking hold of farm work again. Today he went to Stockton with a four-horse load. I have reason to rejoice that he takes such an interest in study, and such a high stand in morals, also he is pleased that Horace and Ida are soon to enter the Normal School and will no doubt, under them great assistance. Georgie is now nine mos. old, weighs twenty two and one-half pounds and has but two teeth as yet I find that he is the largest of the twelve babies.