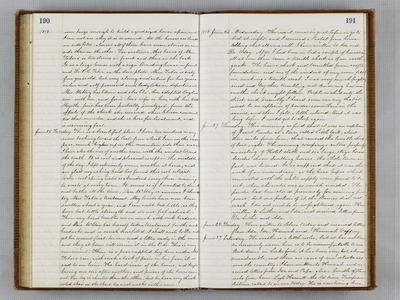 1878. even large enough to build a good sized house upon, and I can not see why it is so named. All the houses are built on side hills, almost all of them have more stories on one side than on the other. For instance, this house of Mrs. Tabor's is two stories in front and three in the back. It is a large house with a sign " Boarding house " in front and "Dr. P.C. Tabor" on the door-plate. Mrs. Tabor is sixty five years old, but very strong and active for her years. calm and self-possessed and lady like in deportment. Mrs. McStay has Edwin and also Eli. her adopted English son with her, and Josie - Geo's wife is here with her little Myrtle. Josie has been partially paralyzed, from the effects of the shock she received when Elision committed that murder, and she is here for treatment, and is recovering fast. June. 25. Tuesday. This is a beautiful place. I have two windows in my room looking toward the East, from which I can see the cars pass, much higher up on the mountain side than we are I have also the use of another room with the window toward the south. It is cool and pleasant except in the middle of the day. I left extremely warm weather at home, and am glad my aching head has found this cool retreat. Water - cool spring water is abundant every where - running to waste at every turn. It seems as if I wanted to drink and bathe all the time. Mrs. McStay is anxious I should try Mrs. Tabor's treatment. My limbs have now been swollen about a year, and I can walk but little, as they have but little strength and do not feel natural. Then my head troubles me so much with sick headache, and Mrs. Mcstay has herself taken treatment for the sick headache and is much benefited. I shall write to Dr. and get his consent first. We can send a letter early in the morn and they at home will receive it in the P.M. This is very convenient. There is a poor crippled boy here under Mrs. Tabor's care, with such a look of pain in his fare, it is sad to see him. He has disease of the bones, and keeps having one sore after another, and prices of the bones come out. One leg is shorter than the other, but he has a very thick soled shoe on the short leg and walks with a cane. 1878. June 26. Wednesday. The mail come in just before we go to bed at night, and I received a Postal from home, telling that all were well. I have written to Ada and Dr. today. After I had been in bed a couple of house or so all at once there came a terrible shock as of an earthquake. The house shook and trembled from roof to foundation, and one of the windows of my room fell in, making a terrible crash. I was very much frightened and lay there trembling, not knowing how soon another shock night follow. People rushed into the street, and presently I heard some one say that it must be an explosion of powder somewhere in the mines, and then I felt a little relieved. But it was long before I could get to sleep again. June 27. Thursday. This morning we find that it was an explosion of Giant Powder at a town called Little York, about three miles from here, that caused the terrible shock of last night. The mining company's entire property consisting of Hotel, stable and six large stage horses besides eleven dwelling houses - the whole town in fact, was burned. It is supposed that it was the work of an incendiary, as the hose piper which connected with the water supply were found to be cut, when the water was so much needed. The powder had been stored previously for mining purposes, but one portion of it, the flames did not reach. I do not wish to be so frightened again. Have written to Luther, and Ida, and received letters from Dr. Luther and Ada. June 28. Friday. Have written to Clara today and received letters from Ada, Ida, Hannah and Hannah Geffroy. Jun 29. Saturday. The weather is a little cooler, but it has not been so excessively warm here as to be uncomfortable to me. But down in Lockeford, it has been very hot, almost unendurable, and there are cases of scan-stroke all over the country. I have written to Hannah and received letters from Ida and Papa, also a bundle of flannels from home. Legh Harnett the old time Temperance lectures, called to see me today. He is now living here,