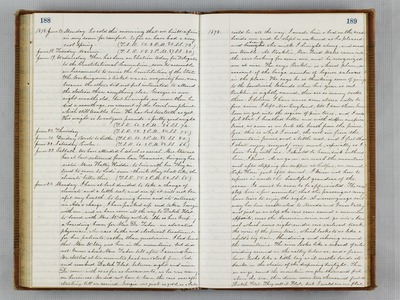 1878. June 17. Monday. So cold this morning that we built a fire in my room for comfort. So far we have had a very cool spring. (T.S.R. 50. 2 P.M. 80. S.S. 72.) June 18. Tuesday. Warmer. (T.S.R. 58. 2 P.M. 87. S.S. 80.) June 19. Wednesday. There has been an Election today for Delegates to the Constitutional Convention, soon to assemble in Sacraments to revise the Constitution of the State. The workingmen's ticket was in majority here, more because the others did not feel interested to attend the election than anything else. Georgie is now eight months old, but he weighs no more than he did a month ago, on account of the bowel complaint which still trouble him. He has but two teeth as yet. His weight is twenty one pounds - a pretty good weight. (T.S.R. 60. 2 P.M. 86. S.S. 74.) June 20. Thursday. (T.S.R. 58. 2 P.M. 84. S.S. 75.) June 21. Friday. Wrote to Luther. (T.S.R. 60. 2 P.M. 88. S.S. 80.) June 22. Saturday. Cooler. (T.S.R. 60. 2 P.M. 82. S.S. 66.) June 23. Sabbath. We have attended S. school as usual. Mrs. Stewart has at last returned from San Francisco, bringing her sister Miss Hattie Kidder - to live with her. They intend to move to Lodi soon - think they shall like the "climate” better there. (T.S.R. 55. 2 P.M. 82. S.S. 65.) June 24. Monday. I have at last decided to take a change of climate and a little rest, and see if it will not benefit my health. So leaving home and its interests in Ada's charge, I have packed up and taken Georgic with me, and we have come all the way to Dutch Flat, to board with Mrs. McStay awhile. She is here keeping a boarding house for Mrs. Dr. Tabor - an educated physician, who uses baths and electrical treatment for her patients, rather than medicine. I had heard that Mrs. McStay was here in the mountains, but did not know about Mrs. Tabor till after I arrived here. We started at ten minutes past one o'clock from Lodi and reached Dutch Flat between eight and nine. Dr. came with us as far as Sacramento, as he was coming on business. We did not have to leave the cars once after starting till we arrived. Georgie was just as good as a baby 1878. could be, all the way. I made him a bed on the seat beside me and he slept or wakened as he pleased and drank the milk I brought along, and made no trouble. At Rocklin, Rev. Fred. Wales came into the cars looking for some one, and he recognized me at once. He says Rocklin is a hard place, on account of the large number of liquor saloons in the place. He says he is thinking some of going to the Sandwich Islands when his year is out. Rocklin is rightly warned, there are so many rocks there. I believe I have never seen stone walls before since I left New England, till I saw them here. Soon we get into the region of pine trees, and I could feel that I breathed better and with deeper inspirations, as soon as we took the breath from the pines. Yes, this is what I need, the cool air from the mountain pines, and a little rest, and I feel that I shall enjoy myself very much, especially as I have baby with me. I should be home sick without him, I know. As we go on, we reach the mountains and after stopping for supper at Colfax, we round "Cape Horn" just after sunset. I know not how to express in words the beautiful grandeur of the scene. It must be seen to be appreciated. The car stop here a few minutes, that the passengers may have time to enjoy the sight. A narrow guage rail way has been constructed to Nevada and Grass Valley and just as we stop the cars come round a mountain opposite, cross the American river, and go into a tunnel which runs right under our railroad track, the noise of the puny train, which looks to us like a child's toy train, thundering and echoing around the mountains. The river looks like a riband of silver winding around in the valley below us, and a farm house looks like a little toy as it nestles beside its Banks, in the shadow of the deepening twilight. Then on we go, round the mountain over four thousand feet above the sea, then down some two thousand feet to Dutch Flat. They call it Flat, but I could see no flat,