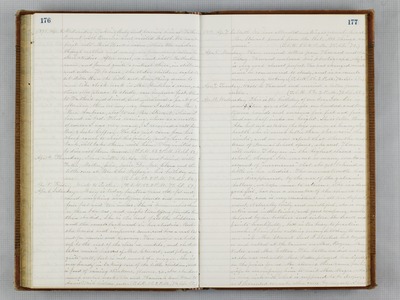 1878. Apr. 3. Wednesday. Taking Baby and leaving him at Father's I went with Eunice and visited school. We went first into Miss Howe's room, where the scholars though restless and noisy, are progressing some in their studies. After recess, we went into Mr. Ambrose's room, and found quite a contrast there, in stillness and order. To be sure, the older children ought to sit stiller than the little ones. Everything seems to move like clock - work in Mr. Ambrose's room, and those who please to study, can improve fast. Went to Father's and dined, and remained a part of the afternoon, then on my way home I called on Mr. & Mrs. Ambrose, also to see Mrs. Stewart, whom I found in bed. This evening, when as a matter of course I was very weary, I received a call from Bro. & Sister Geffroy. He has just come from his sheep ranch to visit his family, and when he goes back, will take them with him. They invited us to dine with them tomorrow. (T.S.R. 53. 2 P.M. 66. S.S. 62.) Apr. 4. Thursday. I have written to Ada. Dr. and I dined with Father, Mother, John, Susie, Dr. Geo. and the little ones at Bro. & Sis. Geffroy's - his birthday dinner. (T.S.R. 52. 2 P.M. 70. S.S. 62.) Apr. 5. Friday. Wrote to Luther. (T.S.R. 52. 2 P.M. 73. S.S. 69.) Apr. 6. Saturday. Mary is today fourteen years old - fat and round - weighing ninety four pounds and measuring four feet and ten inches. She is seven inches shorter than Ida was, and weighs twenty one pounds less than she did. She is the least of all the children and the most backward in her studies. But she learns and improves some, and has a real talent for music and drawing. Her maps are held up to the rest of the class as models, and she still takes music lessons of Mrs. Stewart, and plays quite well, but is not much of a singer. She is very handy in taking care of the little children, and is fond of raising chickens, flowers, etc. also she does much crochet work. She and Hannah have been to Annie O'Neil's birthday party. (T.S.R. 56. 2 P.M. 74. S.S. 66.) 1878. Apr. 7. Sabbath. We have attended meeting as usual heard Mr. Stewart preach from the text, "All things are yours." (T.S.R. 56. 2 P.M. 75. S.S. 70.) Apr. 8. Monday. Have received letters from Howard and Ada today. Howard enclosed his photograph, which is very good almost perfect. He has changed much since he commenced to study, and is so much more manly looking. (T.S.R. 56. 2 P.M. 74. S.S. 68.) Apr. 9. Tuesday. Wrote to Howard and received a letter from Luther. (T.S.R. 53. 2 P.M. 71. S.S. 68.) Apr. 10. Wednesday. This is the birthday of our dear Ida. She is now sixteen years old, weighs one hundred and twenty seven pounds and measures five feet and five and one-half inches in height. She is taller than Ada but not as tall as the boys were, or as heavy. In health she is much better than she was in the winter, and we now expect that when the next turn of Normal School opens, she and Horace will enter. They are in the highest classes in school, though Ida was out so many weeks on account of "nervousness" that she got behind a little in her studies. The nervous trouble has now disappeared, by the use of the galvanic battery, we hope never to return. She is a dear good girl, has been a member of the church two months, and is very consistent in all her department. Naturally lively and mirthful, she is very active and industrious, and good company, much beloved by her brothers and sisters. She draws and paints beautifully, but is too busy to practice much. I have been calling enough today to make me sick. Mrs. Stewart and I started but together and called at the tavern on Mrs. Rogers, Mrs. Veder and Mrs. Cotton. The letter we did not see as she was not well. Mrs. Veder played beautifully on the piano for us. Mr. Stewart then came for his wife to accompany him to visit Mrs. Magee, who is very sick with what is supposed to be dropsy, so I proceeded to make other calls by myself. I want