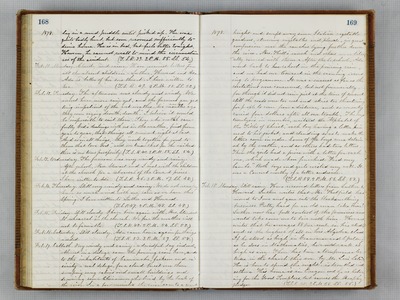 1878. lay in a mud puddle until picked up. He was quite badly hurt, but soon recovered sufficiently to drive home. He is in bed, but feels better tonight. However, he cannot recall to mind the circumstances of the accident. (T.S.R. 39. 2 P.M. 55. S.S. 54.) Feb. 11. Monday. Cloudy and rainy. Have received letters from all the absent children - Luther. Howard and Ada. Ada is better of her sore throat. I have written to her. (T.S.R. 49. 2 P.M. 55. S.S. 52.) Feb. 12. Tuesday. The afternoon was cloudy and windy. We must have more rain yet, and the farmers are getting impatient of the wet weather. Six weeks ago they were crying " drouth, drouth". I believe it would be impossible to suit them. Those who watch carefully God's dealings with us in the weather, find from year to year, that things all come out right at last. And so in all things, they "work together for good to them that love God", and we know that for the wicked there is no true prosperity. (T.S.R. 40. 2 P.M. 55. S.S. 54.) Feb. 13. Wednesday. The forenoon was very windy and rainy. After school, Mrs. Stewart and I met with the children at the church for a rehearsal of the Concert prices. I have written to Ada. (T.S.R. 46. 2 P.M. 57. S.S. 48.) Feb. 14. Thursday. Still very windy and rainy. We do not usually have so much wind with our rain as we have this Spring. I have written to Luther and Howard. (T.S.R. 47. 2 P.M. 48. S.S. 48.) Feb. 15. Friday. Still cloudy I have been again with Mrs. Stewart to rehearsal in the church. We fear the weather will not be favorable. (T.S.R. 42. 2 P.M. 54. S.S. 53.) Feb. 16. Saturday. Still cloudy. Ada came home again for things needed. (T.S.R. 53. 2 P.M. 59. S.S. 58.) Feb. 17. Sabbath. Very windy and rainy - a dreadful day indeed. Almost in a deluge came the pouring rain here, and to the inhabitants of Camanche, Jackson and vicinity a real deluge, for a cloud burst over them sweeping away cabins and small buildings and drowning some Chinaman who lived by the bank of the river. In a few minutes the river rose to a great 1878. height and swept away some Italian vegetable gardens, strewing vegetables and plants, in great confusion over the ranches lying further down the river. Mrs. Hill's ranch and others were literally covered with them. After the S. school, Ada went back to her school in the pouring rain, and we had our Concert in the evening according to programme. It was a success as far as the recitations were concerned, but not financially, for though it did not rain just at the time of concert still the roads were too wet and skies too threatening for people to come from a distance, and so we only raised four dollars after all our trouble. The boys twenty six in number, recited the "Alphabet of the Titles of Christ", each boy having a letter pinned to his jacket, and standing so as to make the letters come in order. Some of the boys were detained by the weather, and so others had two letters. Then the girls had a price with a letter for each one, which made when finished "Feed my lambs". Both boys and girls recited very well. It was a Concert worthy of a better audience. (T.S.R. 58. 2 P.M. 56. S.S. 58.) Feb. 18. Monday. Still rainy. Have received letter from Luther & Howard. Luther writes that Mr. Hetfield has moved to I one and gone into the blacksmithing business. Pretty hard for an old man like him! Luther now has full control of the premises and would like some one to live with him. Howard writes that he averages 88 per. cent. in his study and is the highest of all in his Algebra class. If he stood as high in Grammar and spelling as he does in Mathematics, he would rank as high as any. There has been a temperance lecture in the church this eve. by Mr. Levi Leland. He is here to spend the night - is troubled with asthma. His home is in Oregon and he is lecturing for the Good Templars, but carries the Murphy pledge. (T.S.R. 55. 2 P.M. 56. S.S. 56.)