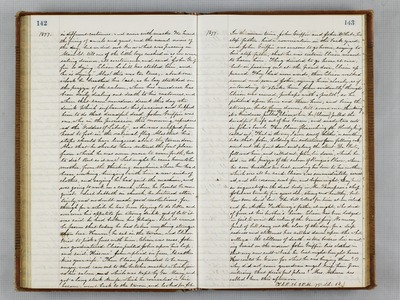 1877. in different costumes, and some with masks. We heard the firing of anvils and guns, and the usual noises of the day, but we did not know what was passing on Main St. till one of the little boys rushed in as we were eating dinner, all excitement, and said, "John Griffin is dying. Elison Cahill has stabbed him, and he is dying." Alas! this was too true, - about one o'clock he breathed his last, as he lay stretched on the piazza of the saloon, when his murderer has been daily dealing out death to his customers, and where that same murderer drank this day the drink which inflamed his passions and helped him to do that dreadful deed. John Griffin was one, who in the procession this morning, represented the "Goddess of Liberty," as he was wrapped from head to foot in the national flag. Alas that his steps should have lingered about the tavern door. Alas that he should have entered the foul place from which he was never more to came forth, but to die! But so it was! Last night he came home to his mother, from the threshing machine where he had been working, bringing with him a new suit of clothes, and saying he had quiet the machine, and was going to work on a ranch, where he could be more quiet. Last Sabbath in church, he listened attentively, and no doubt made good resolutions, for though for a while he has been trying to do better and overcome his appetite for strong drink, yet of late it was said he had broken his pledge. But it cannot be proven that today he had taken anything stronger than beer. However, he sat in the tavern, and Elison tried to pick a fuss with him. Elison was cross, John was goodnatured. Elison pulled John upon his lap, and said," Kiss me! John replied in from, "I'd rather kiss your wife." Then Elison pretended to be very angry, and ran out to the butcher market which joined his saloon, and which was kept by Geo. Mowry, and got a long steak knife, which he concealed in his bosom, went back to the tavern, and looked for John. 1877. In the mean time, John Geiffin and John McCabe, his step-father - had a conversation in the back yard, and John Griffin was anxious to go home, saying to his step-father, that he was certain Elison meant to harm him. They decided to go home at once, but in passing out at the front door, Elison appeared. They had more words, then Elison walked round and round John, eyeing him closely, as if intending to strike him. John evidently thought Elison was armed, perhaps with a pistol, so he pitched upon him and threw him, and being the stronger, held him down, till some one, thinking it a kindness, pulled John off Elison, when he (Elison) pulled the dreadful knife out of his bosom, and made two cuts in John's bowels. Then Elison, flourishing the bloody knife called out," That is the way I serve sons of bitches," or something like that. John, holding his intestines from falling out, went out the front door and along the street. Dr. Foote, followed him, and called out, "John, lie down," which he did, on the piazza of the saloon of Ringer's Place, where he soon breathed his last, sending his love to his mother, which was all he said. Elison was immediately arrested, and the coroner sent for, and before night, they held an inquest over the dead body in Mr. Thompson's shop. John was twenty five years old, strong and healthy, but how soon laid low. The bell tolled for him at one o'clock and for Arthur Trethaway's father at night, who died of fever at his brother's house. Elison has been lodge in jail, to await the action of the Grand Jury. No merry peal of bell rang out the close of the day, for a deep sadness and stillness has settled down upon the whole village, the stillness of death - as two bodies lie awaiting burial on the morrow. John Griffin his clothed in that very new suit which he last night brought home. How could he know for what he was buying them? O why did not some guardian angel keep him from entering that dreadful place? Mrs. Athearn has called her this afternoon. (T.S.R. 56. 2 P.M. 75. S.S. 68.)