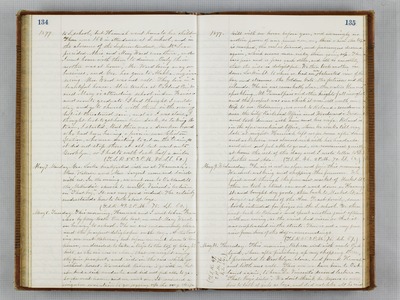 1877. to S. school, but Hannah went home to her children. There were 163 in attendance at S. school, and in the absence of the Superintendent, Mr. McLean presided. Alice and Mary Ward were there, and I went home with them to dinner. Only their mother was at home, Mr. Ward being away on business, and Geo. has gone to Alaska. engineering. Mrs. Ward was not well. They live in a beautiful house. Alice teacher at Oakland Point and Mary is attending school in San Francisco and soon to graduate. I had thought I would stay and go to church with them in the evening but it threatened rain, and as I was alone, I thought best to get home before dark, so taking the train, I started. But there was a drunken crowd who had been having a picnic near Clinton Station, who were waiting to get on the train, so it did not stop there at all, but went on to Brooklyn, so I had to walk back half a mile. (T.S.R. 55. 2 P.M. 80. S.S. 60.) May 7. Monday. Geo. Locke breakfasted with us at Hannah's. Mrs. Wallace and Mrs. Sargent came and dined with us. In the evening, we went over to Oakland to the Methodist church to hear Dr. Vincent's lecture on "That boy." It was very good indeed. He certainly understands how to talk about boys. (T.S.R. 49. 2 P.M. 75. S.S. 60.) May 8. Tuesday. This morning. Hannah and I went to San Francisco by ferry-boat. On the boat, we met Mary Ward on her way to school. The air was uncommonly clear and the prospect delightful on the buy. At the landing we met Rebecca, but before we went down to her house, we decided to take a trip to the top of Clay St. hill, as the air was so clear, that we might enjoy the fine prospect, and ride in the cars which go without horses. We wished Rebecca to go with us, but she heed a sick headache and did not feel able to go. So she went home and we went on. It produced a singular sensation to go fogging up the very steep 1877. hill with no horse before you, and seemingly no motive power of any kind - on, on, then when the top is reached, the car is turned, and passengers descend again, which seems more risky than going up. The cars pass and re-pass each other, and all so smoothly that the ride is delightful. We then took another car down Larkin St. to where we had an unobstructed view of the Bay and steamers the Golden Gate - the fortresses and the islands. The air was remarkably dear, the waters blue and sparkling. Mt. Tamalpais and other heights full insight and the prospect was one which it were well worth our trip to see. Returning, we went to Roland's residence near the City Railroad Office and Woodward's Gardena and took dinner with him and his wife. Roland is in the afore mentioned Office, where he works till very late at might. Hannah left us for home after dinner and as Rebecca was almost sick with her headache and did not feel able to go out, we remained quietly at home the rest of the day and I wrote letters to Dr. Luther and Ada. (T.S.R. 46. 2 P.M. 70. S.S. 62.) May 9. Wednesday. The air is not so clear and fine this morning. We went walking and shopping this forenoon. We first went through the fine new market of Market St. then we took a street car and went down on Kearney St. and bought dry goods, then back to Market St. and bought at the rooms of the Am. Tract Society, some books intended for prizes in the S. school. We then went back to Roland's and spent another quiet afternoon with our sewing, as the wind had risen so that it was unpleasant in the streets. There is not a very fine view from here of the city or surroundings (T.S.R. 45. 2 P.M. 76. S.S. 67.) May 10. Thursday. This morning, Rebecca went with me to Oakland, where after finishing up my shopping there, I proceeded to Brooklyn alone, and found Hannah and little ones well. This eve we have been to Oakland again, to hear Dr. Vincent's second lecture on "That boy's sister." We don't think he knows as well how to talk of girls as boys, and did not like all he said