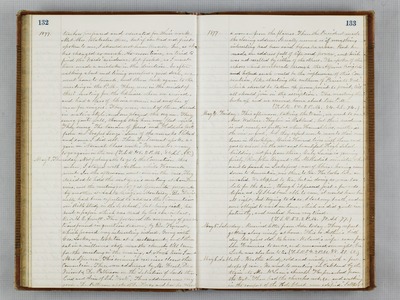 1877. teachers prepared and educated for their work. Met Mrs. Blakeslee there, but if she had not first spoken to me, I should not have known her, as she has changed so much. At noon time, we tried to find the Wards' residence, but failed, as I must have made a mistake in the direction. So after walking about and tiring ourselves a good deal, we went home to lunch, and then back again to the meeting in the P.M. They were in the midst of their meeting for the Chinese when we arrived, and had a class of China women and another of men for singers. They were, most of them, dressed in native style, and one played the organ. They sung quite well, though they have very flat voices. They sung "The banner of Jesus" and "Hold the fort." from our "Gospel Songs." Some of the remarks I liked and some I did not. Then Dr. Vincent spoke again on "Normal Class work." We were to weary to go again in the eve. (T.S.R. 48. 2 P.M. 84. S.S. 65.) May 3. Thursday. Not feeling able to go to the Convention this morn, I stayed with Asthur while Hannah went. In the afternoon went over in the cars. They decided to hold the next years meeting at San Francisco, and the meeting for 1879 at Yosemite, followed by another at Santa Cruz, or Monterey. Dr. Dwinelle had been expected to address the Convention on "Bible Study in the S. school," but being sick, he sent a paper which was read by his son-in-law, Rev. H. E. Jewett. Then followed the answering of questions found in question drawer, by Dr. Vincent, which proved very interesting indeed. Going with Geo. Locke, we took tea at a restaurant, and I then sat in a milliners shop near the church till time for the meeting in the evening, at which time I met Mrs. Spencer. This evening's exercises closed the Convention. There were addresses by Mr. Frost, Dr. Vincent & Dr. Patterson on the "Salvation of Souls the End and Aim of S. S. Work." These addresses were very good. Dr. Patterson spoke of Dr. Knox and how he rescued 1877. a woman from the flames. Then the President made the closing address. It really seemed as if everything interesting had been said before he arose. But he made an address full of life and power, and which was not excelled by either of the others. He spoke of the echoes which reverberate through the Alpine heights and hoped such would be the influence of this Convention, like starting the anthem of "Braise to God" which should be taken up from point to point, till all should join in the ascription. The meeting then broke up and we arrived home about ten P.M. (T.S.R. 50. 2 P.M. 84. S.S. 74.) May 4. Friday. This afternoon, taking the train, we went to see Mrs. Wallace. They live in Oakland, but their residence is not nearly as pretty as where Hannah lives, neither is the view so good, but they expect soon to move to their own house in Brooklyn. Bessie Howard lives with them and goes to school in the new and beautiful High School building, not far from there. Baby Lucia is growing finely. Rev. John Bryant the Methodist minister who used to preach in Lockeford - now of Chico - having come down to Convention, was there to tea. He looks like an invalid. We stopped to tea, but in doing so, were too late for the train, though it passed just a few rods before us. If I had been able to run, it would have been all right, but trying to do so, I lost my breath, and we were obliged to wait an hour, which we did quite impatiently, and reached home very tired. (T.S.R. 52. 2 P.M. 90. S.S. 77.) May 5. Saturday. Received letter from Ada today. They report getting along nicely at home. This is Arthur's birthday - two years old. Rebecca - Roland's wife came from San Francisco to see us, and remained over night. Geo. Locke was also here to tea. (T.S.R. 54. 2 P.M. 88. S.S. 68.) May 6. Sabbath. Weather cloudy, cold and windy, with a few drops of rain. We went to meeting in Oakland by the train to Mr. McLean's church. He preached from the text. "Then had the churches rest, etc. and walking in the comfort of the Holy Ghost, were edified." I stopped