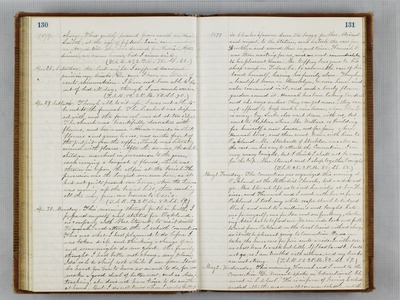 1877. change. Thus gently passed from earth our Annie Smith, at the age of fifteen. Susie came over and we stayed till she was dressed for burial. After dinner, we came home, but I came sick. (T.S.R. 47. 2 P.M. 78. S.S. 66.) Apr. 28. Saturday. All last night I suffered dreadful pain in my limbs. Dr. says I have an attack of acute rheumatism. I have not been able to be out of bed all day, though I am much easier (T.S.R. 52. 2 P.M. 80. S.S. 70.) Apr. 29. Sabbath. Though able to sit up, I was not able to be out to the funeral. The S. school was dispensed with, and the funeral was set at ten o'clock. The church was beautifully decorated with flowers, and her name - Anwa - made in white flowers and green leaves, was on the front of the pulpit over the coffin, which was literally covered with flowers. After the services, the school children, marched in procession to the grave, each carrying a bouquet of flowers, which was thrown in upon the coffin at the burial the procession was the longest ever seen here, as it had not quite passed our house, when the hearse was moving up the burial hill, thus reaching all the way from our house to Geo.'s. (T.S.R. 52. 2 P.M. 80. S.S. 69.) Apr. 30. Monday. This morning though feeble in health, I prepared myself and started for Oakland, in company with Mrs. Stewart, to visit sister Hannah, and attend the S. school convention This was what I had planned to do before I was taken sick, and thinking a change of air and scene might do me good, the family thought I had better not change my plan. Ida is to be chief cook while I am gone. It will be hard for her to have so much to do, for we make a good deal of butter now, and as Ada is teaching, she does not have time to do anything at home. But I do not know when I could better go. 1877. So Charlee Spooner drove the buggy for Mrs. Stewart and myself, to the Station, and we took the cars for Brooklyn and arrived then in good time. Hannah G. was there waiting for us, and we went immediately to her pleasant house. Mr. Geffroy has gone to his sheep camp in Tulare Co. to assume the care of his band himself, leaving his family alone. They have a beautiful home in Brooklyn, a nice house and water convenient in it, and such a lovely flower garden round it. Hannah has been taking boarders and she says unless they can get more, they can not afford to keep such a nice house, when Mr. G. is away. Geo. Locke also went down with us, but went to the place where Mr. Wallace is building for himself a new house, not far from where Hannah lives, and then went home with him to Oakland. Mr. Stockwell of Stockton was also on the cars, on his way to attend the convention. I am very weary tonight, but I think I shall not be worse for the trip. Mrs. Stewart and I sleep together tonight (T.S.R. 45. 2 P.M. 80. S.S. 68.) May. 1. Tuesday. The convention was organized this evening at Oakland at the Methodist Church, but we did not go Mrs. Stewart left us to visit her sister at San Francisco, and Hannah and I went with her as far as Oakland. I took my white crape shawl to be dyed black, and went to a milliner's and bought hats one for myself, one for Ida and one fore Mary, also leaving Ada's hat to be fixed over. We can ride back and forth to and from Oakland on the local trains without charge, so it will be pleasant going to convention. Or we can take the horse cars for five cents a ride. In either case we shall have to walk but little. If I had to walk, I could not go, as I am troubled with asthma, and my limbs are not strong. (T.S.R. 51. 2 P.M. 82. S.S. 69.) May 2. Wednesday. This morning. Hannah and I went to the convention. Dr. Vincent spoke on "Educational Element in S. school." He is in favor of having S. school graded after the manner of common schools, and the