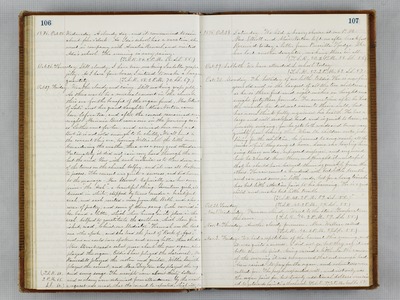 1876. Oct. 25. Wednesday. A cloudy day - and it commenced to rain about four o'clock. As Ida's school has a vacation, she went in company with Amelia Bruml, and visited Ada's school. The evening is very rainy. (T.S.R. 50. 2 P.M. 66. S.S. 56.) Oct. 26. Thursday. Still cloudy. I have been making Isabella grape jelly. As I have four boxes, I intend to make a large quantity. (T.S.R. 58. 2 P.M. 70. S.S. 67.) Oct. 27. Friday. Weather cloudy and rainy. Still making grape jelly. As there was to be a musical concert in the church this eve for the benefit of the organ fund, Mrs. Elliott of Lodi and her grand-daughter - Alice Norton came here before tea, and after the concert remained over night. Minnie Burt came over in the pouring rain as Luther went for her, and arrived here very wet. But it is not cold enough to be chilly. We all went to the concert this eve, leaving Willie with the little ones. Considering the weather, there was a very good attendance. Fortunately it did not rain very hard through the eve but the wind blow with such violence as to blow down one of the towers on the church belfry, and it was all broken to pieces. The concert was quite a success, and did honor to the manager - Mrs. Stewart. Especially was her own piece - "the Arch" - a beautiful thing. Seventeen girls, all dressed in white, stopped by turns under a beautiful arch, and each recited a verse from the Bible, and also a verse of poetry, and some of them sang. Each carried in her hand a letter, which when hung in its place in the arch, helped to constitute the sentence, which when finished, read, "Christ our Mediator." Hannah was the last one who spoke, and she had the part of "Rock of Ages," and no one could have spoken and sung better than she did Mrs. Stewart read a select price about the new organ, also played the organ, Eddie Shaw played the clarionet, Mr. Ramsdell played the violin and guitar, Willie Smith played the cornet, and Mrs. Dayton also played the org. and sung songs. The receipts were about thirty dollars, and as many were detained from attendance by the weather a request was made that the concert be repeated, which will be next week. (T.S.R. 60. 2 P.M. 65. S.S. 60.) 1876. Oct. 28. Saturday. We had a heavy shower at one P.M. Mrs. Elliott and Alice Norton left us after breakfast. Received today a letter from Priscilla Hedge. She has lost another daughter, making three in all. (T.S.R. 50. 2 P.M. 58. S.S. 56.) Oct. 29. Sabbath. We have attended S. school today. (T.S.R. 53. 2 P.M. 63. S.S. 57.) Oct. 30. Monday. The birthday of our little Eddie. He is now five years old and is the largest of all the ten children, as he is three feet and eight inches in height and weighs fortythree pounds. For sometime after he had the measles he did not seem to thrive well, but has now, I think fully regained his health. He has a large and well developed head and is quick to learn, especially singing, for he gets both words and tunes very quickly from hearing them. When the children were practising for the exhibition, he learned to sing nearly all the prices which they sang at home. Some one hearing him sing them one day, expressed surprise, and inquired how he should know them, and thought it wonderful that he should have learned them so quickly from the others. He can count a hundred with but little trouble, and can read some in little words, but for a long time he has but little attention paid to his learning. He is a quiet child and makes but little trouble. (T.S.R. 42. 2 P.M. 59. S.S. 55.) Oct. 31. Tuesday. (T.S.R. 42. 2 P.M. 59. S.S. 55.) Nov. 1. Wednesday. Forenoon cloudy - Went to the store. Temperature the same. (T.S.R. 42. 2 P.M. 59. S.S. 55.) Nov. 2. Thursday. Another cloudy forenoon. Mrs. Wallace called. (T.S.R. 42. 2 P.M. 59. S.S. 55.) Nov. 3. Friday. We had a repetition of the Concert this evening, and it was quite a success. I did not go, but they say it was better than the first, being varied a little. In the course of the evening it was announced that not enough had been raised to pay for the organ, and volunteers were called for. The people responded well, and not only was the organ paid for, but twenty additional dollars were raised to go towards painting the church. (T.S.R. 37. 2 P.M. 60. S.S. 55.)