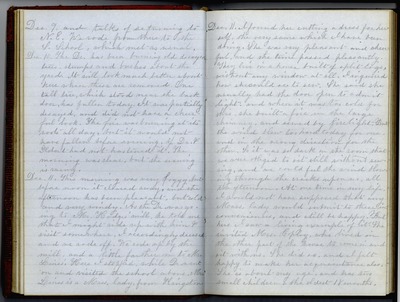 Dec. 9. and talks of returning toN. E. We rode from there to theS. School, which met as usual,Dec. 10. The Dr. has been burning old decayedtrees, stumps and bushes about theyard. It will look much better abouthere when these are removed. Onetall tree, which stood near the backdoor, has fallen today. It was partiallydecayed, and did not have a cheerfullook. The fire was burning at itsroots all day, but it would nothave fallen before evening, if Dr. &Robert had not hastened it. Themorning was clear, but the eveningis rainy.Dec. 11. This morning was very foggy, butbefore noon it cleared away, and theafternoon has been pleasant, but coldand very windy. As the Dr. was goingto Mr. Hodges' mill, he told methat I might ride up with him &visit somewhere. I accordingly dressedand we rode off. We rode up by themill, and a little farther on to Mr.Lines'. Here I stopped, while Dr. wenton and visited the school above. Mrs.Lines is a Mass, lady, from Kingston.Dec. 11. I found her cutting a dress for herself,the very same which I have beendoing. She was very pleasant and cheerfuland the time passed pleasantly.They live in a house built of split logs,without any window at all. I inquiredhow she could see to sew. She said sheusually had the door open to admitlight and when it was too cold forthis, she built a fire in the largechimney, and sewed by firelight. Butthe wind blew too hard today for one,and in the wrong direction for theother. So it was so dark in the room thatwe were obliged to sit still without sewing,and we could feel the wind blowingthrough the cracks upon us, allthe afternoon. At one time in my life,I would not have supposed that anyMass. lady would submit to theseinconveniences, and still be happy. Buthere I saw a living example of it. Sheinvited Mrs. Copley, who lived inthe other part of the house to come in andsit with us. She did so, and I felthappy to make her acquaintance also,She is about my age, and has twosmall children - the oldest 18 months,