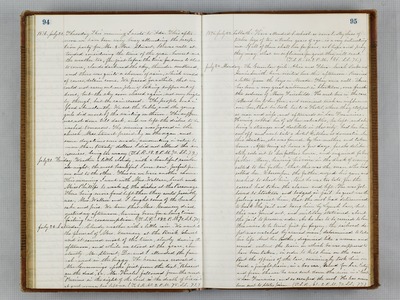 1876. July 20. Thursday. This morning I wrote to Ada. This afternoon we have been very busy attending the reception party for Mr. & Mrs. Stewart. It was well attended considering the time of the year - harvest - and the weather too, for just before the time for some to start to come, clouds darkened the sky, thunder muttered, and there was quite a shower of rain, which would of course, detain some. We feared for a while, that we could not carry out our plan of taking supper out of doors, but the sky soon cleared again, not very brightly though, but the rain ceased. The people sent in food abundantly. We set the tables, and the young girls did most of the waiting on them. The supper was not done till dark, and we left the dishes to be washed tomorrow. The evening was passed in the church, Mrs. Stewart presiding on the organ, and some donations were made, amounting in value to more than twenty dollars. I did not attend the eve exercises, being too weary. (T.S.R. 58. 2 P.M. 90. S.S. 79.) July 21. Friday. Weather a little cloudy, with a beautiful rainbow at night, the most beautiful I ever saw, perfect from one and to the other. This eve we have another shower. This morning I went with Mrs. Wallace, Sarah and Miss Phillips to wash up the dishes at the Parsonage. There being more ford left than they could possibly use, Mrs. Wallace and I bought some of the bread, cake and pies. We learn that Mrs. Guernsey died yesterday afternoon, having been for a long time failing in consumption. (T.S.R. 58. 2 P.M. 90. S.S. 70.) July 22. Saturday. Cloudy weather with a little rain. We went to the funeral of Mrs. Guernsey at the Brick Church and it rained most of the time, slowly during the afternoon, and while we stood at the grave, constantly. Mr. Stewart, Dr. and I attended the funeral went in the buggy. The house was crowded. Mr. Cummings spoke first from the text, "Blessed are the dead", &c, Mr. Hurtel followed from the words "Precious in the sight of the Lord in the death of his saint" A good woman has left us. (T.S.R. 60. 2 P.M. 75. S.S. 71.) 1876. July 23. Sabbath. Have attended S. school as usual. My class of twelve boys of ten or twelve years of age, is a very interesting one. If all of them shall live for Jesus, as I hope and pray they may, what an influence for good they will exert. (T.S.R. 60. 2 P.M. 86. S.S. 76.) July 24. Monday. The Greenlaw girls. Alice and Flora - Sarah Locke and Annie Smith, have visited here this afternoon. Received a letter from the boys in Nevada. They were well. There has been a very great excitement in Stockton, over Jacobs the seducer of Mary Fairchilds. He met her in the cars, followed her to San Jose, and exercised such an influence over her, that he took her to a Hotel, where they stopped as man and wife, and afterwards in San Francisco. Having robbed her of all her valuables, he left, and she being a stranger and destitute in that city, had her hair cut off and went into a hotel kitchen as domestic. In this situation, she was found by her mother and taken home. After being at home a few days, Jacobs deliberately rode out to her father's house, and inquired for her father. Mary, hearing his voice in the dusk of evening called to her father, that this was the man who had robbed her. Whereupon the father sized his gun and rushed to shoot him. But he was too late, for the rascal had taken the alarm and left. He was followed to Stockton and lodged in jail. So great was the feeling against him, that the mob had determined to break the jail and hang him by Lynch law, but this was found out, and military stationed about the jail to preserve order. As he was to be carried to San Francisco to be tried first for forgery, the railroad depot was watched by armed men, determined to take his life. And her brother, disguised like a woman and armed, entered the train on which he was supposed to have been taken, in order to kill him on the cars. But the officers of the law, cunningly took him on board a freight train, in a box car, bound for Sac. City, and from thence he was sent down the river in a boat to San Francisco, and as escaped the mob. He has since been sent to States prison. (T.S.R. 61. 2 P.M. 90. S.S. 77.)