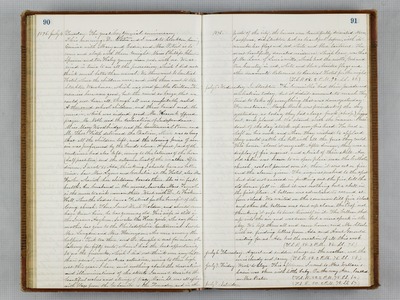 1876. July 4. Tuesday. The great Centennial anniversary. This morning, Dr. Johnnie and I went to Stockton, leaving Eunice with Mary and Eddie, and Mrs. O'Neil is to come and sleep with them tonight. Miss. Phillips, Charlie Spooner and two Haley young men rode with us. We arrived in time to see all the procession, which I did not think much better than usual. We then went to Central Hotel, where the children were, and with them went to the Stockton Warehouse, which was used for the Pavilion. The exercise here were good, but the crowd so large, that we could not hear all, though all were comfortably seated. A thousand school children, and three bands made the music, which was indeed good. Mr. Heacork offered prayer, Mr. Noble read the declaration of Independence, Miss Mary Woodbridge read the Centennial Poem and Mr. Thos. Fitch delivered the Oration, which was so long that all the children left, and the closing price of music was performed by the bands alone. A great part of the audience had also left, owing to the lateness of the hour (half past two) and the extreme heat of the weather. After dinner, I wrote to Ada, thinking I should have no better time. Saw Mrs. Lyons and Cornelia at the Hotel, also Mrs. Fowler, who with her children boards there. She is in feeble health - her husband in the mines. Saw also Mrs. Tam who is the nurse to a sick woman there. Went with Dr. to Hickman's Hall, where the Ladies have a Festival for the benefit of the Cong. church. There I met - Uncle Holden, and should scarce have know him, he has grown so old. His wife is still in the Insane Asylum. Saw also the Kerr girls, who say their mother has gone to the Philadelphia Centennial. Saw also Mrs. Langdon and Mrs. Kennyson, who were among the helpers. Took tea there, and Dr. bought a seat for me on the balcony for fifty cents, when I had the best opportunity to see the fireworks, which I did not think were any better than usual, and not so extensive, owing to their high cost this year. I have said nothing about the decorations and illuminations of the streets. I cannot describe the beautiful arches and strings of flags. Main St. was all afloat with flags from the Go Semite to the Foundry, and in other 1876. parts of the city, the houses were beautifully decorated. Never, I suppose, did Stockton look so beautiful before, with its numberless flags and red, white and blue lanterns. The most beautifully decorated residence, which I saw, was that of Mr. Lane, of Lane's mills, which had the motto, "God and Our Country" in red, white and blue, besides flags and other ornaments. Returned to Central Hotel for the night. (T.S.R. 58. 2 P.M. 92. S.S. 80.) July 5. Wednesday. In Stockton. The "Invincibles" had their parade and celebration today, but it didn't amount to much. They tried to take off everything that was done yesterday. For instance, Mayor Buck was president of the day yesterday, so today they had a large buck (sheep) ligged out, and placed on the stand with the banner -"President of the day" stuck up over his head. He had a bell on his neck, and when they wished to applaud they would rattle the bell, with all the force they could. "His honor" stood it very well. After dinner, they was a display of fire engines, and a trial of their skill. An old cabin was drawn to an open place near the Catholic church, coal oil poured over it, then it was set on fire and the alarm given. The engines rushed to the spot but did not succeed in putting out the fire, till the old house fell in. But it was nothing but a shell in the first place. A balloon was advertised to ascend at four o'clock. We waited on the common till five o'clock and then the balloon was sent up alone, the "Prof." not thinking it safe to trust himself in it. The balloon shot up into the air and was soon but a mere speck in the sky. We left them all and came home, and Mr. Steele with us, finding letters from Ada and Aunt Gerould waiting for us. Ada has the vacation of all this week. (T.S.R. 58. 2 P.M. 86. S.S. 76.) July 6. Thursday. A great and sudden change in the weather, and the eve is cloudy and rainy. (T.S.R. 58. 2 P.M. 76. S.S. 58.) July 7. Friday. Wrote to Eliza. This afternoon I went to Mrs. Wallace's. Susie was there with little baby. On the way there, I called on Mrs. Prater. (T.S.R. 52. 2 P.M. 75. S.S. 64.) July 8. Saturday. (T.S.R. 50. 2 P.M. 78. S.S. 67.)