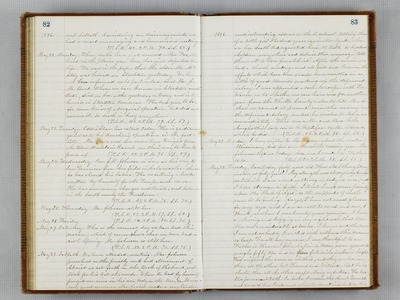 1876. next. Sabbath. Considering our discouragements, we had a most encouraging and harmonious meeting. (T.S.R. 42. 2 P.M. 70. S.S. 65.) May 22. Monday. Three deaths have just occurred. Mrs. Fox, who lived on the plains near here, has just departed this life. We saw in the paper that the elder Mr. McStay was buried in Stockton yesterday. We have not been informed as to particulars. And Mr. J. M. Burt whom we have known in Stockton and Lodi, died in Sac. either yesterday or today and is to be buried in Stockton tomorrow. He had gone to Sac. for some kind of a surgical operation, but did not survive it. So death is busy everywhere. (T.S.R. 48. 2 P.M. 79. S.S. 67.) May 23. Tuesday. Eddie Shaw has called today. He is quite sanguine as to his Ranching operations in the foothills. Mr. Greve and son came here tonight from the Blue Mountain Ranch, on their way to Sac. to prove up. (T.S.R. 52. 2 P.M. 76. S.S. 57.) May 24. Wednesday. Rev. J. R. Johnson is here on his way to San Francisco from his field in Calaveras Co. where he has closed his labors. He is selling a book written by himself for the Temperance cause. He has seen many changes and trials, and labored in the South among the Freedmen. (T.S.R. 47. 2 P.M. 76. S.S. 70.) May 25. Thursday. Mr. Johnson still here. (T.S.R. 52. 2 P.M. 69. S.S. 60.) May 26. Friday. (T.S.R. 54. 2 P.M. 84. S.S. 76.) May 27. Saturday. This is the warmest day we have had this season, which of course shows that we have had a cool Spring. Mr. Johnson is still here. (T.S.R. 58. 2 P.M. 90. S.S. 76.) May 28. Sabbath. We have attended meeting. Mr. Johnson preached on the priestly work and atonement of Christ as set forth in the Book of Hebrews, and took for his text the words. "When he had by himself purged our sins in his own body on the tree," etc. It was a very good sermon. Mr. J. also made a very tender 1876. and interesting address to the S. school, telling them of a little girl who died years ago in New York, who, on her death bed, requested him to talk to S. school children everywhere and deliver this, message "tell them all to love Jesus Christ." After the service we had a church meeting, and all felt sad because the efforts which have been made have resulted in so little of good towards making up the deficient salary. I was appointed a com. to confer with Dr. Warren as to whether we can have aid for another year from the H. M. Society - also to tell Mr. S. that we cannot at present raise the money on the deficient salary, unless he wishes to leave us immediately. This eve. a Mr. and Mrs. Cole brought their baby son to be baptized by Mr. Stewart, which he did. (T.S.R. 56. 2 P.M. 76. S.S. 65.) May 29. Monday. I have written to Mr. Warren about the matter of Missionary Aid for our church the coming year. Mr. Johnson left us today. Ada and I went to Father's to tea. (T.S.R. 50. 2 P.M. 81. S.S. 65.) May 30. Tuesday. I am today forty years old. How old I thought my mother at forty years! My strength was always weakness so I think I am about as strong in body as ever, and I hope stronger in faith. I trust I rest more family upon the "Rock of Ages," as the supports of earth seem to be failing. As yet, I have not used glasses for my eyes, and I see as well to read and sew, I think, as when I was twenty years younger. I have a whirring and buzzing in my right ear that troubles me considerably at times. I know not the cause I am not so badly troubled with asthma this summer as last. For all my mercies, I am thankful to our Father in Heaven. John Calvin is today seven years old weighs fifty lbs. and is three feet, mine inches in height. His weight is the same as Luther's, and they are heavier than all the others but Howard and Willard. But he is shorter than all the others except Mary and Ada. He has two permanent teeth. In looks, he resembles Aunt Gerould and some of her boys, and when he sometimes puts on his