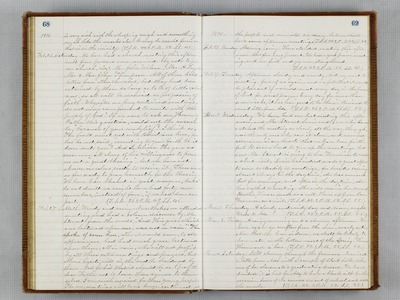 1876. is very sick with the whooping cough and something much like the measles also. It may be scarlet fever, as that is in the vicinity. (T.S.R. 44. 2 P.M. 52. S.S. 45.) Feb. 26. Saturday. We have had a church meeting this afternoon and four persons were received by vote to join our church, viz. Mr. John Wilson, Mr. A. Inglis Mr. & Mrs. John Thompson. All of these held letters from other churches, but they had been retained by them so long as to be of little value now, so all will be received on profession of faith. Why, after our long continued meetings, do not more come forward to unite with the people of God? If we were to ask our Heavenly Father this question, would not the answer be," because of your unbelief?" I think so, The fault must rest with Christians here, for has he not said, "according to your faith be it done unto you?" And I believe He gave us assurance all along of his willingness to pour us out a "great blessing," but we have not shown ourselves ready to receive it. There were so few ready to pray earnestly for the blessing. We have been blessed in great measure, but I do not doubt we might have had forty new members, instead of four, if we had done our part. (T.S.R. 33. 2 P.M. 49. S.S. 46. Feb. 27. Sabbath. Windy and rainy. Nevertheless we attended meeting, and had a solemn discourse by Mr. Stewart from the words, "And His grace which was bestowed upon me, was not in vain." He spoke of some here, who it would seem, to all appearances, had had much grace bestowed upon them, all in vain, who will not profit by all these extra meetings and prayers, but whose hearts, will in the end, be hardened by them. God forbid that it should be so. I pray the dear Father not to leave these sinners to themselves. I am much exercised for these young people. The eve. meetings will be us longer continued, as 1876. the people and minister are weary, but we shall have some afternoon meetings. (T.S.R. 44. 2 P.M. 42. S.S. 44.) Feb. 28. Monday. Morning rainy. Have attended meeting this afternoon. But four were present. We had a good praise meeting, and our faith and joy were strengthened. (T.S.R. 43. 2 P.M. 51. S.S. 48.) Feb. 29. Tuesday. Afternoon cloudy and windy, but we went to meeting, four of as again, and we felt that it would be pleasant if we could meet every day in the house of God, for social prayer. Every day for more than seven weeks, it has been "good to be there." Received the usual letter from Ada. (T.S.R. 36. 2 P.M. 56. S.S. 53.) Mar. 1. Wednesday. We have had our last meeting this afternoon, and Mr. Stewart, Susie and I, we who have watched the meeting so closely all the way through, were the only ones who saw it close, and received assurance in our hearts that we have been faithful. It seems hard to give up the meetings, but now Mr. Stewart is going to San Francisco to make a short visit. Susie has indeed made a great effort to come so steadily to meetings, for besides coming almost always in the day time, she has missed but few evenings, and often in the day time, she has walked to meeting. She will receive her reward. Brother Horace made us a call. He is up from San Francisco on a visit. (T.S.R. 42. 2 P.M. 58. S.S. 55.) Mar. 2. Thursday. A cloudy and windy day and rainy night. Wrote to Ada. (T.S.R. 50. 2 P.M. 55. S.S. 55.) Mar. 3. Friday. A rainy morning and a showery afternoon. We have again an overflow from the river, nearly entire. Now that the level is down, we shall be likely to have water on the bottom most of the Spring. Horace Hammond is here. (T.S.R. 50. 2 P.M. 55. S.S. 50.) Mar. 4. Saturday. Still showery through the forenoon. Received a letter from Ada with a sample of black silk, like one of her classmate's graduating dresses. We have decided it is best for Ada to have a black silk for the occasion. Some of the seniors are out of school sick with the measles. (T.S.R. 43. 2 P.M. 50. S.S. 48.)