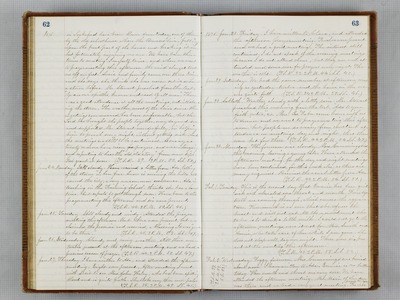 1876. in Lockeford have been blown down today, one of them by the old schoolhouse where the Bruners live, falling upon the front part of the house and breaking it in, but fortunately injuring no one. We have been three times to meeting, I myself twice, and when we went to prayermeeting this afternoon, the wind almost took us off our feet. Susie and family came over three times and she says she thinks she was never out its so hard a storm before. Mr. Stewart preached from the text, "Ye are our epistles, known and read of all men." There was a good attendance at all the meetings, not withstanding the storm. The weather, most of the time since, the meetings commenced, has been unfavorable, but the Lord has brought the people together, every day and eve, and supported Mr. Stewart wonderfully, in helping him to preach every night, without getting sick. And the meetings are still to be continued. As many as twenty or more have risen for prayers, and wear longing and expecting to hear the "old, old story" from new lips. God grant it soon. (T.S.R. 39. 2 P.M. 50. S.S. 50.) Jan. 24. Monday. Still cloudy. Have received a letter from Ada, telling of the storm in San Jose. Snow is covering the hills all round the city, a very uncommon occurrence. Ada is teaching in the Training School - thinks she has a hard time, but expects to get through soon. Have been to the prayermeeting this afternoon and six were present. (T.S.R. 44. 2 P.M. 50. S.S. 45.) Jan. 25. Tuesday. Still cloudy and windy. Attended the prayer meeting this afternoon. But there were present, but we claimed the promise and received a blessing. It was "good to be there." (T.S.R. 45. 2 P.M. 53. S.S. 49.) Jan. 26. Wednesday. Cloudy and rainy weather, still there were twelve present at the afternoon meeting, and we had a precious season of prayer. (T.S.R. 44. 2 P.M. 50. S.S. 47.) Jan. 27. Thursday. I have written to Ada, and attended the afternoon meeting. Eight were present. After meeting, I went with Susie to see Mrs. John Haley, who has been spitting blood and is quite feeble. She looks very thin and pale. (T.S.R. 35. 2 P.M. 49. S.S. 45.) 1876. Jan. 28. Friday. I have written to Clara, and attended the afternoon prayermeeting. Twelve were present and we had a good meeting. The interest still continues. I do not speak of the evening meetings because I do not attend them, but they are well attended, and some rise for prayers every night. The weather is cold. (T.S.R. 32. 2 P.M. 44. S.S. 40.) Jan. 29. Saturday. We had the same number at afternoon meeting as yesterday - twelve - and the house in the eve. was quite full. (T.S.R. 34. 2 P.M. 50. S.S. 46.) Jan. 30. Sabbath. Weather cloudy with a little rain. Mr. Stewart preached this morning from the text, "Add to your faith, virtue," etc. Mrs. Lee Faber came home with us to dinner and we went to prayermeeting this afternoon, but people are so weary from constant attendance on meetings day and night, that there were but few there. (T.S.R. 44. 2 P.M. 54. S.S. 47.) Jan. 31. Monday. The forenoon was cloudy. Mrs. Cummings died this morning, leaving a young babe. Have attended the afternoon meeting, for the day and night meetings have been continued, for this week also, as there are many inquirers. Received the usual letter from Ada. (T.S.R. 44. 2 P.M. 54. S.S. 51.) Feb. 1. Tuesday. This is the second day that Eunice has been quite sick with ulcerated sore throat and mouth. Four eye teeth are coming through, which causes the aggravation. Her mouth is so sore that she refuses the breast and will not eat. All the nourishment she takes is to drink a little milk. I could not go to the afternoon meeting, were it not for Mrs. Smith and Annie, who take care of her while I am gone. She does not sleep well, day nor night. There were six present at the meeting this afternoon. (T.S.R. 40. 2 P.M. 55. S.S. 52.) Feb. 2. Wednesday. Foggy forenoon. Mrs. Cummings was buried about noon. I have written to Ada. Eunice is no better today. Her mouth and throat are very sore. We have attended the afternoon meeting. Mr. Main of Linden was there and we had a very good meeting. He will preach tonight. (T.S.R. 37. 2 P.M. 53. S.S. 58.)