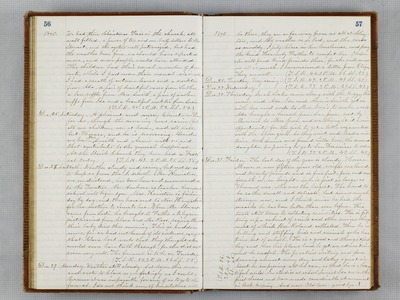 1875. We had three Christmas Trees in the church, all well filled, a purse of ten and one-half dollars to Mr. Stewart, and the oysters well patronized, but had the weather been fine, we should have expected more, and more people would have attended. The children had their usual number of presents, while I had more than usual - six in all. I had a wreath of autumn leaves and a necktie from Ada, a pair of beautiful vases from Luther, a lace ruffle from Mrs. Smith, a pair of woolen cuffs from Ida and a beautiful necktie from Susie. (T.S.R. 45. 2 P.M. 52. S.S. 50.) Dec. 25. Saturday. A pleasant and merry Christmas Day for us, though the morning was rainy, for all our children are at home, and all well but Horace, and he is recovering. Besides we have Mrs. Smith and Annie with us, and that contributes to the general happiness. At the Brick Church they have had a Festival today. (T.S.R. 49. 2 P.M. 58. S.S. 56.) Dec. 26. Sabbath. Weather cloudy and rainy, but not so as to keep us from the S. school. Mr. Keniston, we understand, has been here and recommended to the Trustees, Mr. Ambrose as teacher here, and school will begin soon. Mrs. Keniston is failing day by day, and they have sent to New Hampshire for her mother to come to her. When Mr. Stewart came from Lodi, he brought to Father a telegram just received from Clara and Mr. Ross, saying that their baby died this morning. This is sudden news, for we had not heard of its sickness, except that Clara last wrote that they thought she would soon have teeth through, for she did not seem very well. The funeral is to be on Tuesday. (T.S.R. 50. 2 P.M. 53. S.S. 53.) Dec. 27. Monday. Weather still cloudy. Sat down this morn and wrote to Clara as comfortingly as I could, because it was impossible for any of us to go to the funeral. I do not think any of her relatives will 1875. be there, they are so far away from us all at Clayton, and the weather is so bad, and the roads so muddy. I pity Clara in her loneliness, and pray the kind Heavenly Father to comfort her. I hope she will find kind friends there, for she will miss us all so much. I have received a letter from Eliza. They are well. (T.S.R. 44. 2 P.M. 56. S.S. 53.) Dec. 28. Tuesday. Very rainy. (T.S.R. 49. 2 P.M. 49. S.S. 47.) Dec. 29. Wednesday. (T.S.R. 37. 2 P.M. 49. S.S. 47.) Dec. 30. Thursday. Sarah Locke came along with the buggy this morn. and Ada, Ida and Annie Smith got in with her and rode to Mrs. Gove's, to make a call. Ada brought a bundle from San Jose, sent by Minnie to Mrs. Gove, and we thought it a nice opportunity for the girls to get a little acquainted with the Gove girls. So they went and had a nice time, took dinner and found Lilla Gove, the second daughter, preparing to go to San Francisco to school (T.S.R. 35. 2 P.M. 49. S.S. 47.) Dec. 31. Friday. The last day of the year is cloudy. Horace Mann is now fifteen years old, weighs one hund. and twenty pounds and is five feet, five and one fourth in. in height. So he is just as large as Howard was, who was the largest. He used to be rather small and delicate, but seems much stronger now, and I think since he had the measles he has been better than ever before. His taste still turns to collecting curiosities. He is fitting up a cabinet of coins and other curious things most of which Bro. Roland collected. Then he is killing and stuffing birds and animals as he has time, out of school. He is a good and thoughtful boy and has his plans laid to get an education and be useful. He practises writing and pen drawing, almost every day and takes a great interest in improving all he can, so that he is a beautiful writer. In studies at school, he and Ida are in the first classes, and have made considerable advancement in Book - keeping. And now - Old Year - good bye - ! (T.S.R. 36. 2 P.M. 48. S.S. 45.)