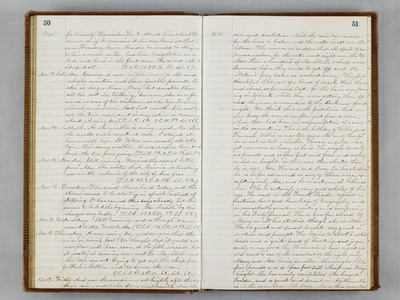 1875. for himself. He wished Dr. to attend him, which Dr. cannot do, if he remains at his own home, as that is near Harmony Grove. Besides, he would be obliged to hire a nurse, so Dr. had him brought here on a bed, and he is in the front room. He is not able to sit up at all. (T.S.R. 50. 2 P.M. 63. S.S. 57.) Nov. 13. Saturday. Eunice is now fifteen months old and weighs nineteen and three fourths pounds. So she is larger than Mary, but smaller than all the rest. In teething, however, she is as forward as any of the children, as she has twelve, which number she had last month. She walks all the time now, and is very active in running about. A rainy day. (T.S.R. 54. 2 P.M. 54. S.S. 56.) Nov. 14. Sabbath. As the weather is rainy, and Mr. Nichols needs such constant care, I stayed at home with him. It takes me nearly all the time, this rainy weather, to wait upon him and keep the two fires going. (T.S.R. 54. 2 P.M. 56. S.S. 54.) Nov. 15. Monday. Still raining. Received the usual letter from Ada. She writes that Minnie is teaching now in the suburbs of the city of San Jose. (T.S.R. 49. 2 P.M. 54. S.S. 54.) Nov. 16. Tuesday. The wind blows hard today and the storm seems to be starting in afresh instead of stopping. It has rained three days already, but this seems to be but the beginning. Mr. Nichols' leg discharges very badly. (T.S.R. 51. 2 P.M. 59. S.S. 58.) Nov. 17. Wednesday. Still raining, and as though it never meant to stop. Wrote to Ada. (T.S.R. 56. 2 P.M. 58. S.S. 59.) Nov. 18. Thursday. A very rainy day, and so warm that the river is rising fast. We thought that it would not overflow just from rain, as the little rivers do, but it really is coming over, and Dr - Mr. - Steele - and the boys are out trying to get up the sheep from J. Hen's bottom, and to secure the levee. (T.S.R. 60. 2 P.M. 62. S.S. 60.) Nov. 19. Friday. And now the sun shines out brightly after the six day's rain, and looks down complacently upon the 1875. ruin and desolation which the rain has caused, for the levee is broken and the water is all over the bottom. The rise was so sudden that all efforts to save it were useless, for the water went right over the top. More than a hundred of Mr. Steele's sheep were drowned before they could be got off and Mr. Norton's ferry boat was washed away. They feel thankful that, out of a band of nearly three thousand sheep, so few were lost, for the rain was pouring in torrents, while they were getting them off, and they were surrounded by the darkness of midnight. We think this is the first time that we ever know the river to over flow just from a rain, when there had been no accumulation of snow in the mountains. This is the birthday of Willie and Hannah. Willie is now ten years old and though he is not as tall as Luther, Horace and Ida were, yet none were so heavy as he is. He weighs seventy six pounds and is four feet and four and one - half inches in height. So there were three shorter than he is viz. Ada, Howard and Mary. In his studies he is as far advanced as any of them were, excepting only Ada, and he is not much behind her. He is certainly a very good scholar of his age. He reads in the Fourth Reader, ciphers in fractions, has a good knowledge of Geography and is remarkable quick in writing and composing in his Daily Journal. He is now far ahead of Mary in all his studies, though she is older. He is quick and smart to work, very quick in motion and prompt. He begins to shoot and kill birds and is quite fond of hunting, and is generally a very good boy. Hannah is now eight yrs. old and is one of the smallest of the eight, only Mary and Ada being smaller. She weighs fifty five pounds and is four feet tall, which was Mary's height. She has nearly completed the Second Reader, and is quick and smart in Arithmetic is in the same class with Mary, who is three years older