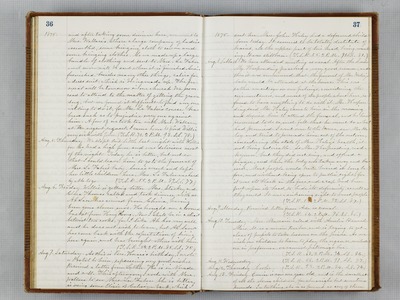 1875. and after taking some dinner here, we went to Mrs. Wallace's, where a large company of ladies assembled, some bringing cloth to sew on and some bringing clothes. So we made up a large bundle of clothing and sent to Mrs. Le Faber and more will be sent when it is finished. Susie furnished, besides many other things, calico for a dress suit, which is being made up. The funeral will be tomorrow in our church. We promised to attend to the matter of getting the grave dug, but we found it difficult to find any one willing to do it, for Mr. Le Faber's course has been such as to prejudice every one against him. A few of us took tea with Mrs. Wallace at her urgent request. I came home to find Willie very sick with fever. (T.S.R. 70. 2 P.M. 93. S.S. 78.) Aug. 5. Thursday. We slept but little last night with Willie for he had a high fever and was delirious most of the night. Today he is better, but not so that I could leave him to go to the funeral of Mrs. Le Faber's baby. Susie went and left her little children here. Mrs. Le Faber was hardly able to go. (T.S.R. 55. 2 P.M. 89. S.S. 77.) Aug. 6. Friday. Willie is getting better. Mrs. Starkey and Clara Thomas called and took dinner with us. Ah Saow has arrived from China, having been gone eleven mos. He brought me a covered basket from Hong Kong. Now I shall be in a strait betwixt two cooks, for I like Ah Coo very well and he does not wish to leave, but Ah Saow has come back with the expectation of living here again, and has brought others with him. (T.S.R. 54. 2 P.M. 85. S.S. 75.) Aug. 7. Saturday. As this is Bro. Horace's birthday, I wrote a Postal to him, expressing my good wishes. Received a letter from Luther. He is in Nevada and well. This afternoon, I rode with Mrs. Wallace to see Mrs. Lee Faber. She is better, is using some Elixir of Calisaya back, which 1875. sent her, Mrs. John Holey had a deformed child born today. It seemed to be totally destitute of brains, all the upper part of his head being wanting. It was still born. (T.S.R. 55. 2 P.M. 91. S.S. 81.) Aug. 8. Sabbath. We have attended meeting as usual. After the S. school Mr. Harpending preached a very good sermon, and then it was announced that the funeral of Mr. Haley's babe would be attended at the house. This was rather an outrage on our feelings, considering the circumstances, and most of the people about here refused to have anything to do with it. Mr. Harpending said Mr. Haley came to him in the morning and desired him to attend the funeral, and he had promised to do so, and felt that he must do as he had promised. I went over to the house, saw Mr. Haley and tired to persuade him out of the nation, considering the state of Mrs. Haley's health, it not being advisable. so Mr. Harpending read a hymn, but they did not sing, and offered a prayer, and then the body was taken away and buried. Most people would have buried it long before, and without being open to public sight, for it was all black in the face, and a cap had been put upon its head, to hide its deformity, as well as they could. It was a sickening sight to most people. (T.S.R. 58. 2 P.M. 93. S.S. 87.) Aug. 9. Monday. Received letter from Ada as usual. (T.S.R. 64. 2 P.M. 96. S.S. 86.) Aug. 10. Tuesday. Mrs. Murrain called with Amelia Bruml. Mrs. M. is a music teacher, and is trying to get a class of pupils to take lessons on the piano. As we wish our children to learn to play the organ or melodeon in preference, we cannot patronize her. (T.S.R. 68. 2 P.M. 94. S.S. 84.) Aug. 11. Wednesday. (T.S.R. 56. 2 P.M. 91. S.S. 77.) Aug. 12. Thursday. Cooler. (T.S.R. 53. 2 P.M. 84. S.S. 74.) Aug. 13. Friday. Eunice is now one year old, and is the smallest of all the eleven children, for she weighs but seventeen pounds. In teething, she is as forward as any of them