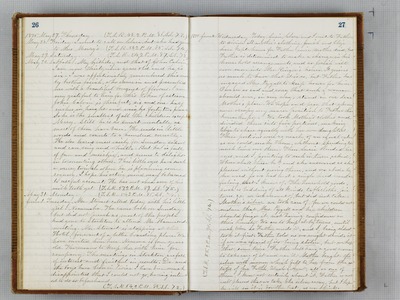 1875. May 27. Thursday. (T.S.R. 48.2 P.M. 86. S.S. 73.) May 28. Friday. I went to call on Clara, but she had gone to Mrs. Mowry's. (T.S.R. 54.2 P.M. 85. S.S. 74.) May 29. Saturday. (T.S.R. 54.2 P.M. 87. S.S. 78.) May 30. Sabbath. My birthday and that of John Calvin. I am now thirty nine years old and he is six. I was affectionately remembered this mor. by brother Josiah, who came in and presented me with a beautiful bouquet of flowers. I am very grateful to him for this token of esteem. John Calvin is three feet, six and one-half inches in height and weighs forty two pounds. So he is the smallest of all the children except Mary. Still he is as smart mentally as most of them have been. He reads in little words and counts to a hundred correctly. He also learns verses easily for Sunday school and can sing and whistle. But he is full of fun and mischief, and seems to delight in tormenting others. His little eyes have such a merry twinkle when he is planning some roguery. I hope his active mind may be turned to useful account. He has not shed any of his milk teeth yet. (T.S.R. 57.2 P.M. 89. S.S. 75.) May 31. Monday. (T.S.R. 54.2 P.M. 85. S.S. 74.) June 1. Tuesday. Mr. Stewart called today with his little girl - Nemmaha. He came back on Sunday, but did not preach as most of the people had gone to Stockton to attend Mr. Hammond’s meeting. Mr. Stewart is stopping at the Hotel, for want of a better boarding place. We have invited him here. Nemma is four years old. He means to keep her with him for company. The meetings in Stockton are full of interest and fruitful in results. Dr. and the boys have been in twice I have been much disappointed that I could not go, having intended to do so beforehand. (T.S.R. 54.2 P.M. 85. S.S. 72.) 1875. June 2. Wednesday. Today, Susie, Clara and I went to Fathers to divide all mother's clothing. Josiah and Eliza have kept house for Father since mother died, but Father is determined to make a change in his household arrangements, and so Josiah will soon move into Mr. Ringer's house. It grieves us much to know that it is so, but Father has engaged Mrs. Pygall to keep house for him. O we are so sad and sorry that such a woman should ever, in any way, stand in our dear Mother's place. We hope and pray that she may never occupy any nearer position to Father than housekeeper. We took Mother's clothes and divided them into five portions, making Eliza to share equally with her own daughters. These portions were as nearly of an equal value as we could make them, without spending too much time over them. Then Susie blinded her eyes, and I pointing to each in turn, asked, Whose shall these be? and she answered as she pleased without seeing them, and we abode by her word. So we had not a single hard word or feeling, that I know of. The household goods, such as bedding of all kinds, tablecloths, pictures, etc. we took account of, but did not take. Mother's silver we took care of, for we could not endure that Mrs. Pygall and her children should finger it, not having confidence in their honesty. We are to keep it by turns, until such time as Father needs it, and I being eldest, took it first. Father told us we might divide it if we were afraid of its being stolen, but we hope that, sometime, Father will have a good woman to take care of it and use it. Mother bought the silver with money which fell to her from the estates of her Father, Uncle & Aunt, all or one of them, I know not certainly about it. Father is not well pleased that we take the silver away, but I hope he will see it is for the best, as we think. (T.S.R. 55.2 P.M. 90. S.S. 74.)