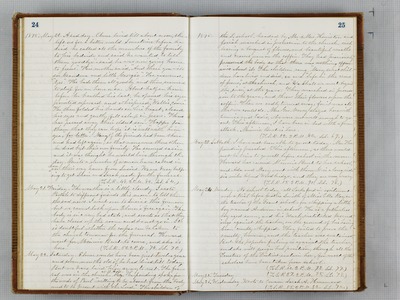 1875. May 20. A sad day. Elmer lived till about noon, then left us for a better world. Sometime before he died he called all the members of the family to his bedside and said he wanted to tell them "goodbye" - said he was now “going home to Jesus." His mother said, "And there you will see Grandma and little Georgie." He answered, "Yes". He bade them all "goodby" and then seemed to sleep for an hour or so. About half an hour before he breathed his last, he opened his eyes pointed upward and whispered." Wallie, come." He then folded his hands on his breast, closed his eyes and gently fell asleep in Jesus. Thus has passed away their eldest son. Happy for them that they can hope it is "well" with him yea, "for better." Many of the friends had been there and had left again, so that none were there when he died but their own family. He seemed easier and it was thought he would live through the day. Quite a number of women have called in here on their way home from Susies. We are busy helping to get Susie and Sarah ready for the funeral. (T.S.R. 48.2 P.M. 80. S.S. 64.) May 21. Friday. The weather is a little cloudy. I wrote Postals to different friends this morn. to tell them the sad news. I went over to Susie's this forenoon but we cannot look upon Elmer's face again. The body is in a very bad state, and scents so that they have closed up the room and do not go in. It is doubtful whether the corpse can be taken to the church tomorrow for the funeral. Howard went for Minnie Burt to come, and she is here. (T.S.R. 50.2 P.M. 74. S.S. 70.) May 22. Saturday. Elmer would have been just twelve years and seven months old if he had lived till today. But we have laid him away to rest. The funeral was in the church at 11. A. M. Mr. Harpending spoke from the words of Paul "willing to be absent from the body and to be present with the Lord. "The children of 1875. the S. school, headed by Mr. & Mrs. Keniston and Josiah marched in procession to the church, each bearing a bouquet of flowers, and beautiful wreaths and crosses were on the coffin. They had previously preserved the body so that there was nothing offensive about it. The children sang, "Many sweet children have lived and died," &.c and "Safe in the arms of Jesus," at the church, and "We shall we meet beyond the river," at the grave. They marched in procession to the grave, and threw their flowers upon the coffin. Then we sadly turned away, for it was all that we could do. Mrs. Geo. Mowry stayed here with Eunice and Eddie, who were not well enough to go out. This afternoon, I have been in bed with a fever attack. Minnie Burt is here. (T.S.R. 52.2 P.M. 80. S.S. 69.) May 23. Sabbath. I have not been able to go out today. Mr. Harpending preached. This afternoon, as there would not be time to go well before school in the morn. Howard has carried Minnie Burt to her school, and Ada and Mary went with them. It is a long ride six miles beyond Woodbridge, and they are very weary. (T.S.R. 55.2 P.M. 90. S.S. 76.) May 24. Monday. No school today - all Lockeford in excitement over a trial before Justice Smith of Miss Ella Royce, the teacher of the Grant school - for whipping a little boy named Anderson in school. He is a fatherless boy aged seven, and his Uncles instituted proceedings against the teacher, on the ground of his having been cruelty, whipped. They failed to prove the cruelty, however, and the teacher was sustained. But the popular feeling is against the teacher and she will resign her position, though all the Trustees of the District sustain her, for most of the scholars have been taken from school. (T.S.R. 60.2 P.M. 93. S.S. 77.) May 25. Tuesday. (T.S.R. 57.2 P.M. 85. S.S. 73.) May 26. Wednesday. Wrote to Cousin Sarah A. Hammond. (T.S.R. 55.2 P.M. 82. S.S. 72.)