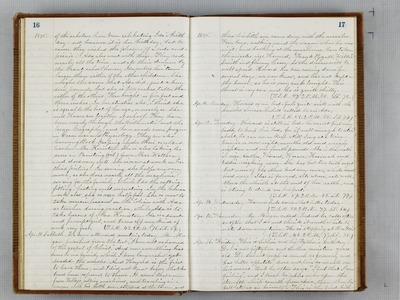 1875. of the scholars have been celebrating Ida's birthday - not because it is her birthday, but because they wished the pleasure of a ride and a picnic. Ada also went with them. They rode nearly all the time, and ate their dinners by the Grant schoolhouse. Ida enters her "teens" larger than either of the other children. She weighs the same that Ada did, just a hundred pounds, but she is two inches taller than either of the others. Her height is five feet and three inches. In her studies also, I think she is equal to the best of her age, or nearly so. She and Horace are together at school. They have been nearly through the Arithmetic and the larger Geography, and have made some progress in Grammar and Physiology. They are also learning Book-Keeping under their excellent teacher - Mr. Keniston. She is also taking lessons in Painting (oil) from Mrs. Wallace, and does very well. She is now at work on her third picture. In sewing, she helps me very much, as she does nearly all the machine sewing for the family, while I do the cutting, fitting, basting and mending. In the housework also, she is very helpful. She is now to take music lessons on the Eolian with Ada as teacher during vacation, while Ada is to take lessons of Mrs. Keniston. Ida is a smart and prompt girl, and turns off any kind of work very fast. (T.S.R. 43.2 P.M. 76. S.S. 69.) Apr. 11. Sabbath. We have attended meeting today. Mr. Morgan preached from the text, "I am not ashamed of the gospel of Christ." And now something has come to our family which I have long wished yet dreaded - the measles. And Howard is the first to have them, and I did not know before that he had been exposed to them. It seems that a man from Valley's, selling machines, and traveling in a wagon with his little son, stopped at the tavern, and 1875. there his little son came down with the measles. Four boys, walking round the wagon when he was in it, and looking at the machines, have taken the measles, viz: Howard, Frank Pygall, Willie Smith and Jimmy Casey. So the disease will be well spread. Howard has been coming down for several days, we now know, and has not kept in the house, so he is very sick tonight. His throat is very sore and he is quite chilly. (T.S.R. 47.2 P.M. 80. S.S. 72.) Apr. 12. Monday. Howard is in bed - feels quite sick with the measles. Louisa Cahill called to see Ada. (T.S.R. 56.2 P.M. 85. S.S. 77.) Apr. 13. Tuesday. Howard is still in bed - he must feel very badly to keep his bed, for if well enough to stir about, he can never keep still long at a time. Eunice is now eight months old and weighs eighteen and one-fourth pounds. She is the sixth in size, Luther, Howard, Horace, Hannah and Eddie weighing more. She has but two teeth as yet but none of the others had any more, while most had none. She is forward, sits alone, eats well, blows the whistle at the end of her rattle, and is strong to stand on her feet. (T.S.R. 57.2 P.M. 85. S.S. 79.) Apr. 14. Wednesday. Howard feels somewhat better today. (T.S.R. 50.2 P.M. 77. S.S. 64.) Apr. 15. Thursday. Mr. Morgan called. Indeed he calls often so often that I do not think it worth while to note down every time. He is stopping at Bro. Geo's (T.S.R. 48.2 P.M. 77. S.S. 75.) Apr. 16. Friday. This is Luther's and his Father's birthday. Dr. is now fifty two and Luther nineteen years old. Dr. does not cough as much as formerly and has better appetite, does not live so much on his nerves. But he often says, "I feel that I am failing," and I trust he relies more upon the strength which cometh from above, than when he felt strong in himself. This is the first birth-