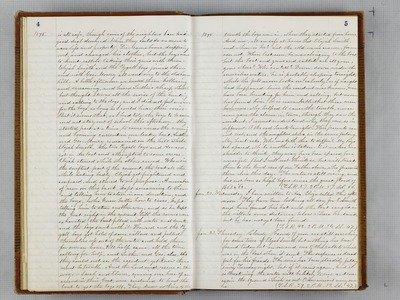 1875. is all safe, though some of the neighbors have had a good deal drowned. When they could do no more to save life and property, Dr. came home, dripping wet, and changed his clothes, but the boys went to hunt rabbits, taking their guns with them. Elijah Smith and the Pygall boys joined them and with Geo. Mowry all went over to the old house hill. A little afternoon we heard them hollering and screaming, and heard Luther's sharp whistle but thought it was all the noise of the hunting and calling to the dogs, and I did not feel anxious for the boys, as long as I could hear their voices. But it seems that, as I had told the boys to be sure and not stay out of school this afternoon, they started, part at a time, to come across the roaring and booming current in our leaky boat. Luther and Geo. Mowry remained on the hill while Elijah Smith, the two Pygall boys and Howard, got in the boat and attempted to come across. Elijah steered while the others rowed. When in the swiftest part of the current, the boat all the while leaking badly, Elijah got frightened and confuse, and steered to no purpose. A number of men on this bank, kept screaming to them and telling him to steer in one direction, and the boys, who knew better how to cross, kept telling him to steer another way, and so he kept the boat right in the current till the rowers were exhausted, the boat filled with water and sunk, and the boys sunk with it. Howard and the Pygall boys got hold of some willows and pulled themselves up out of the water and held there for over an hour, till help came, all the time calling for help, and Luther and Geo, also, tho' they could not see the accident, yet knew there must be trouble. And the Lord send rescue in this way. Sarah and Elmer, coming over here of an errand in their boat, were induced to lend the boat to get the boys off. They knew nothing of the 1875. trouble the boys were in, when they started from home. And now, all are safe at home but Elijah Smith, and where is he? Let the cold waves answer, for we can not. When last seem, he was clinging to the boat, but the boat and guns and rabbits are all gone, gone where? Who can tell? Down, down under the merciless waters, he is probably sleeping tonight, while the full moon looks on calmly, as if naught had happened. Since the accident was known, men have been hunting for him, and calling, but no one has found him. It is remarkable that those men bummers - who helped to cause the trouble, never even gave the alarm in town, though they saw the accident. I cannot understand why they were so indifferent. O the sad hearts tonight. His parents can not rest, and the neighbors shar in the same feeling, My heart asks, "Who maketh thee to differ?" My boys are spared, while another is taken. O it makes me shudder to think they may have been spared for a worse fate. But I will not think so, but will trust them to the kind care of our Father above, who preserve them alive this day. The water is still rising, and has not been so high before since the great flood of 1861 & '62. (T.S.R. 57.2 P.M. 59. S.S. 56.) Jan. 20. Wednesday. I have written to Ada. Eliza called this afternoon. They have been looking all day for E. Smith and have found his hat and the boat caught in the willows some distance below where he sunk, but he has not yet been found. (T.S.R. 42.2 P.M. 54. S.S. 47.) Jan. 21. Thursday. Cloudy. Crowds of men are still searching for some trace of Elijah Smith, but nothing has been found today but an oar and one of the rabbits which was in the boat when it sunk. The suspense is dreadful for his friends. The river has been steadily falling since Tuesday night, but if it rains again, and it is threatening, the water will be likely to rise and cover again the ground which is out. O how anxious every one is. (T.S.R. 37.2 P.M. 53. S.S. 47.)