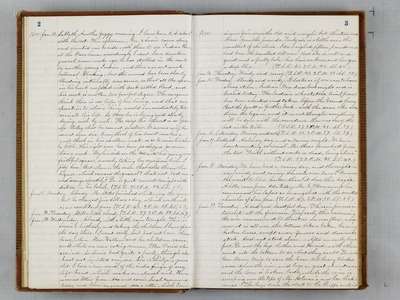 1875. Jan. 10. Sabbath Another foggy morning. I have been to S. school with the rest. This afternoon, Geo. & Susie came along and invited me to ride with them to see Indian Ben at the Rancharea, accordingly I went. In a drunken quarrel, some weeks ago, he was stabbed in the neck by another young Indian, and there was not much external bleeding, but the wound has been slowly bleeding internally ever since, so that all the spaces in his neck are filled with dark settled blood, and his neck is swollen to a fearful degree. The surgeons think there is no hope of his living, and that an operation to relieve him would immediately terminate his life. So there he is lying and slowly dying, inch by inch. He says his throat is so filled up today that he cannot swallow. It seems as if he must soon die. Every throb of his heart makes a great throb in his swollen neck, so as to raise his chin a little. His right arm has been paralyzed for more than a week. By his side on the bed sits his young and faithful squaw, scarcely taking her eyes from him. I pity him. But where is the man that sold them the liquor, which caused the quarrel? Shall not God see and "average speedily?" Dr. is quite unwell tonight with distress in his bowels. (T.S.R. 35.2 P.M. 54. S.S. 51.) Jan. 11. Monday. Cloudy. Mr. Stites finished whitening the rooms but he charged five dollars a day, which we think is an exorbitant price. (T.S.R. 41.2 P.M. 51. S.S. 51.) Jan. 12. Tuesday. Still a little cloudy. (T.S.R. 37.2 P.M. 52. S.S. 47.) Jan. 13. Wednesday. Cloudy, with a little rain tonight. This is Susie's birthday, and taking the children. I have spent the day there. I went early, but had not been there long, when Mrs. Wallace and her children came, and while we were eating dinner, Ellen Baird also arrived. So Susie had quite a party, though she had not invited any one. She is thirty six years old. I have "a run-round" of the index finger of my lift hand, which makes me almost sick. Have received letters from Ada and cousin Sarah Hammond today and have answered Ada's letter. Little Eunice 1875. is now five months old and weighs but thirteen and three-fourths pounds. Truly she is a little one - the smallest of the eleven. Ida weighed fifteen pounds and had been the smallest till now. But she is well and quiet, and a pretty babe - her hair auburn, and her eyes a deep blue. (T.S.R. 41.2 P.M. 45. S.S. 45.) Jan. 14. Thursday. Windy and rainy. (T.S.R. 47.2 P.M. 51. S.S. 51.) Jan. 15. Friday. Cloudy and windy. It looks as if we were to have a long storm. Indian Ben died last night and is buried today. The Indian who stabbed him (Jesus) has been arrested and taken before the Grand Jury. But the fault is farther back - with the man who sold them the liquor, and it is not thought anything will be done with the murderer. Ben was one of the best in the tribe. (T.S.R. 37.2 P.M. 42. S.S. 39.) Jan. 16. Saturday. Rainy and cold. (T.S.R. 35.2 P.M. 37. S.S. 39.) Jan. 17. Sabbath. A cloudy day and a rainy night. We have been to meeting as usual. Mr. Ross preached from the text. "Faith without works is dead, being alone." (T.S.R. 37.2 P.M. 45. S.S. 42.) Jan. 18. Monday. We have had a rainy day, and the night is very windy and rainy. Scarcely ever have I known the wind to blow harder than it does this night. A letter came from Ada today. Mr. E. P. Hammond has commenced his labors as evangelist with the united churches of San Jose. (T.S.R. 47.2 P.M. 50. S.S. 58.) Jan. 19. Tuesday. A sad and dreadful day. The rain poured in torrents all the forenoon. Very early this morning the river commenced to threaten an overflow, and now it is all over the bottom, like a lake, having broken levees, swept away fences and drowned stock. And not stock alone. After an early breakfast, Dr. and the boys - Luther and Howard - with others went into the bottom to do what they could Dr. and Geo. Mowry tried to save the levee, but heavy timbers came down the river, and logs in great abundance and the levee is broken badly, while the river is sweeping over the tops of Mr. Holman's and Geo. Locke's levees. The boys drove the stock to the bluffs and it