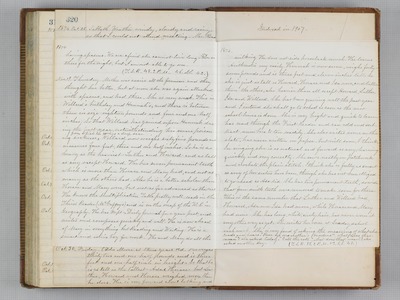 1874. having spasms. We are afraid she cannot live long. Dr. is there for the night, but I am not able to go over. (T.S.R. 48.2 P.M. 46. S.S. 42.) Nov. 19. Thursday. Mother was easier all the forenoon and they thought her better, but at noon she was again attacked with spasms, and had three. She is very weak. This is Willard's birthday and Hannah's, and there is between them in size - eighteen pounds and four and one-half inches. So that Willard has gained upon Hannah during the past year, notwithstanding his severe poisoning sickness from which he carries a deep scar. Willard now weighs sixty five pounds and measures four feet, three and one-half inches. So he is as heavy as the heaviest - Luther and Howard - and as tall as any except Howard. He has seven permanent teeth which is more than Horace and Mary had, and not as many as the others had. Also he is a better scholar than Horace and Mary were, but not as far advanced as the rest. He knows the Multiplication Table pretty well, reads in the Third Reader (McGuffey's) and is on the map of the W. S. in Geography. He has kept a Daily Journal for a year past, and writes and composes quickly and well. He is now ahead of Mary in everything but Reading and Writing. He is a smart and active boy for work. He and Mary do all the 1874. milking. He does not ride horseback much. He learns Arithmetic very easily. Hannah is now seven, weighs forty seven pounds and is three feet and eleven inches tall. So she is just as tall as Howard, Horace and Ida were, and taller than the others, also heavier than all except Howard, Luther, Ida and Willard. She has been growing well the past year and I intend she shall go to school as soon as the new school-house is done. She is very bright and quick to learn has read through the First Reader and can add and subtract numbers to ten readily. She also writes some on the slate, has never written on paper, but will soon, I think. In singing, she is as natural and forward as any, learning quickly and very correctly. She sews neatly on patchwork and crochets the plain stitch. I think she is fully as smart as any of her sisters have been, though she has not been obliged to go ahead as Ada did. She has two permanent teeth, so wide that four milk teeth were removed to make room for them. This is the same number that Luther and Willard had, Howard, Ada and Ida had more, while Horace and Mary had none. She has long, white, curly hair, has never worn it any other way as yet. She recites her verse at Sunday school each week. She is very fond of asking the meaning of what she reads and hears. "Bear ye one another's burdens" what does that mean"? she asked today. "Call the roll", what does that mean"? she asked another day. (T.S.R. 33.2 P.M. 52. S.S. 48.)