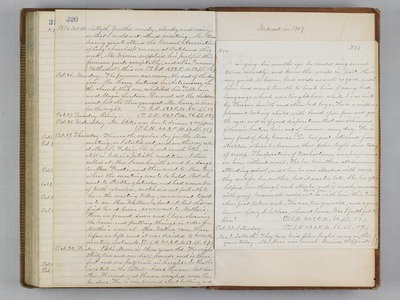 1874. Oct. 25. Sabbath. Weather windy, cloudy and rainy, so that I could not attend meeting. Mr. Ross having gone to attend the General Association of Cong. churches, to convene at Oakland this week, Mr. Warren supplied his pulpit this forenoon quite acceptably, and Mr. Cumming (Methodist) this eve. (T.S.R. 47.2 P.M. 52. S.S. 56.) Oct. 26. Monday. The forenoon was rainy, the rest of the day fair. Mr. Carey lectured on Astronomy in the church this eve, exhibited his Tellurion and Magic Lantern. Dr and all the children went but the three youngest. Mr. Carey is here for the night. (T.S.R. 51.2 P.M. 55. S.S. 53.) Oct. 27. Tuesday. Rainy. (T.S.R. 50.2 P.M. 56. S.S. 55.) Oct. 28. Wednesday. Mr. Stites was here to dinner & supper. (T.S.R. 44.2 P.M. 60. S.S. 56.) Oct. 29. Thursday. This was the regular day for the Miss. meeting, so I started out, and on the way called at Mrs. Le Faber's. She is not much better, is still in bed, in a pitiable condition. I then called at Mrs. Isaac Smith's and her daughter Mrs. Frost's, and then went to Mrs. Gay's where the meeting was to be held. But she went to Stockton yesterday and had a number of teeth extracted, so she did not feel able to have the meeting today, so we went together to see Mrs. Wallace about it, but did not find her at home, so we went to Mother's. Here we found Susie and Eliza cleaning the house and putting things in order for Mother's arrival. Mrs. Wallace came there before we left and it was decided to hold the meeting next week. (T.S.R. 40.2 P.M. 62. S.S. 57.) Oct. 30. Friday. Eddie Moore is three years old. He weighs thirty two and one-half pounds and is three feet and one-half inch in height. So that he is as tall as the tallest. Ada & Horace but Luther, Howard and Horace weighed more than he does. He is very forward about talking and 1874. singing. Six months ago, he could sing several tunes correctly, and knew the words in past. He is very quick to learn, bad words as well as good, and I have had much trouble to break him of using bad language which was taught him while I was sick by Hiram Smith and other bad boys. He is a mild and pleasant looking child, with broad, open face and gentle eyes, and is of good disposition. But mischievous Johnnie hectors him out of humor every day. He is very fond of baby Eunice. Dr. has just returned from Stockton, where he learned that John Inglis died today of croup. The operation of trachiotomy was performed on him without avail. He has been there all summer attending school, and when he was attacked with croup they sent for his mother, but it was too late. She has often helped him through such attacks, and is nearly overcome with grief, because she could not have been with him this time when first taken sick. He was ten years old, and a good boy, one of my S. S. class, when at home. Was I faithful to him? (T.S.R. 40.2 P.M. 64. S.S. 57.) Oct. 31. Saturday. (T.S.R. 41.2 P.M. 65. S.S. 59.) Nov. 1. Sabbath. They have laid John Inglis away in the grave today. Mr. Ross was much desired to officiate