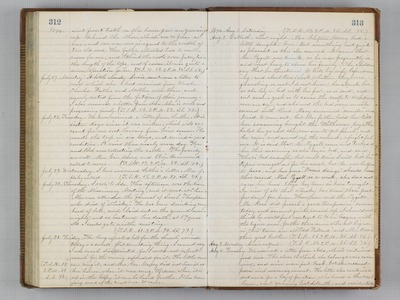 1874. nent front teeth on the lower jaw are growing up behind the others, which are as firm as ever, and one new one is equal to the width of two old ones. Her father extracted two to make room for one, and I think the roots were fully twice the length of the tops, and of course, it was quite a severe operation for her. (T.S.R. 58.2 P.M. 82. S.S. 68.) July 27. Monday. A little cloudy. Susie sent me a letter to read which she had received from Uncle Charles. Father and Mother were there and nearly rested from the fatigue of their journey. I also received a letter from Ada. She is well and progressing finely. (T.S.R. 56.2 P.M. 83. S.S. 72.) July 28. Tuesday. We have received a letter from Luther. It is sixteen days since it was written, which will account for our not hearing from him sooner. He made the trip in six days, and arrived in good condition. It rains there nearly every day. He and Bob were collecting the cattle. The family are well. Mrs. Geo. Mowry and Eliza Hammond called to me. (T.S.R. 59.2 P.M. 83. S.S. 72.) July 29. Wednesday. I have answered Luther's letter. Mrs. J. Haley called. (T.S.R. 56.2 P.M. 87. S.S. 81.) July 30. Thursday. I wrote to Ada. This afternoon was the time of the Missionary Meeting, and it met at Clara's Also was attended the funeral of SamL. Thompson who died of "whisky." He has been drinking very hard of late, and laid out on the ground some nights, and so hastened his death, at 59 years old. I could go to neither meeting. (T.S.R. 61.2 P.M. 92. S.S. 79.) July 31. Friday. The long expected bell for the church arrived today - a small, flat sounding thing. I cannot say I was much disappointed, for I could not expect much for the money expended for it. The little ones can sing it, and Mrs. Geo. Moury did not hear it at her house, when it was rung. Of course, when it is up in the belfry, it can be heard father. It has been going most of the time since it came. (T.S.R. 57.2 P.M. 86. S.S. 74.) 1874. Aug. 1. Saturday. (T.S.R. 50.2 P.M. 86. S.S. 75.) Aug. 2. Sabbath. Last night. Mrs. Clifton Mowry had a little daughter born. But something not quite so pleasant as this also occurred. It seems that Mr. Pygall was drunk, as he now frequently is, and went home to abuse his family. The children say that he threatened to kill his wife before morning, and about two o'clock, (whether they were quarreling or not I do not know) he struck her as she lay in bed with his fist, as is said, and cut such a gash as to cause the scalp to drop down over one eye, and she and the bed were much covered with blood. Mary screamed "murder" and tried to run out, but her father held her till her screaming brought the Thethaway boys, there he let her go and she ran over to get Josiah, and he came and sewed up the wound, a frightful one. It is said that Mr. Pygall came and looked at her this morning as she lay in bed, and said, "That's bad enough, but next time I will kill her." Papers were got out for his arrest, but he was helped to leave, and has gone." Rum's doings" should head this record. Mrs. Pygall is so weak, she does not raise her head. Eliza has been in here tonight. In view of all that whisky has done these past few days for Sam. Thompson and the Pygalls, Mr. Ross did preach a good temperance sermon today, and seemed quite roused up. I should not think he would feel content to be in league with the liquor men, for the there men who sell liquor in this town are all "Odd Fellows" and Mr. Ross is their good brother. (T.S.R. 56.2 P.M. 86. S.S. 76.) Aug. 3. Monday. Susie called. (T.S.R. 54.2 P.M. 86. S.S. 74.) Aug. 4. Tuesday. We received a letter from Ada, which contained good news. The class to which she belongs were examined , and nine were put back, but she received parse and encouragement. The letter also contained sad news, for a boy of fourteen, who lived in the next house, went gunning last Sabbath, and accidentally