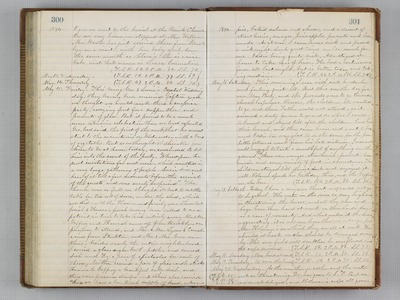 1874. before we went to the burial at the Brick Church. On our way home we stopped at Mrs. Wallace's Mr. Baxter has just arrived there from Brooklyn on a visit, with her baby girl, born the same month as Clara's. She is a nice babe, and her name is Laura Emmeline. (T.S.R. 50.2 P.M. 80. S.S. 70.) May 13. Wednesday. (T.S.R. 50.2 P.M. 77. S.S. 69.) May. 14. Thursday. (T.S.R. 47.2 P.M. 80. S.S. 70.) May 15. Friday. This being Geo. & Susie's Crystal Wedding day, they having been married fifteen years, we thought we would make them a surprise party, carrying food for a supper there, and presents of glass. But is proved to be a much more extensive celebration than we had expected. Geo. had said, the first of the week that he must start to the mountains on Wednesday with a load of vegetables. But as we thought it desirable for him to be at home today, we concluded to let him into the secret of the party. Whereupon he sent invitations far and near, which resulted in a very large gathering of people. Susie did not hear of it till a few moments before the arrival of the guests, and was surely "surprised". The house was so full, we thought it best to set the table for tea out of doors, under the shed, which we did. All the Hammond family were there but Josiah & Horace, Josiah having been called to see a patient, in time to take him entirely away. But Mr. Geffroy and Hannah came up from Brooklyn on purpose to attend, and Mr. & Mrs. Lyons & Carnelis came from Stockton, and Mr. & Mrs. Gove were there, besides nearly the entire neighborhood carried a glass sugar bowl - pitcher and covered dish and Dr. a pair of spectacles for each of them, Mother carried a pair of glass candle sticks Hannah Geffroy a beautiful cake dish, and there were preserve dishes and others also carried. Then we had a bountiful supply of bread, cakes and 1874. pies, baked salmon and cheese, and a dessert of straw berries, oranges, pine-apples, peanuts and lemonade. As it was, I came home sick and passed a sick night. Such great times are too much for me. Eddie being quite sick, Ada stayed at home to take care of him. He had a continuous fever all last night, but is better today and taking medicine. (T.S.R. 48.2 P.M. 86. S.S. 74.) May 16. Saturday. This morning I sore with sick headache and feeling quite ill. But this was the day for our May Party, and the proceeds were to go towards church expenses. Besides, the children all wanted to go, and their Father could not attend, so it seemed a duty for me to go and do what I could. So I went and stayed till after the children had had their lunch, and then came home and went to bed and Eddie too was glad to do the some, for the poor little follow is weak from his late sickness. I was not well enough to taste a mouthful of anything on the ground, tho there were oranges, strawberries, peanuts, lemonade and every variety of food in abundance. The children stayed till almost dark and enjoyed it well Roland spends his birthday thus, and the Geffroy are also here. (T.S.R. 54.2 P.M. 88. S.S. 76.) May 17. Sabbath. Today I have a very sore throat and could not go to S. school. The water in the river is very high and is threatening the levees, and all the men and boys have been hard at work on this Lord's day as a care of necessity. And what makes it the more aggravating, it is not our levee that is in danger, but Mr. Holman's on which they are all at work. For should it break, we also should be damaged severely. His own field will doubtless be overflowed and the crops rained (T.S.R. 58.2 P.M. 88. S.S. 71.) May 18. Monday. Men hard at work (T.S.R. 56.2 P.M. 88. S.S. 73.) May 19. Tuesday. to save the levees. (T.S.R. 54.2 P.M. 75. S.S. 65.) May 20. Wednesday. As the weather is cooler and the water not so threatening, Dr. has gone to S. F. But we are much deluged, and Holman's crops all gone. (T.S.R. 55.2 P.M. 78. S.S. 63.)