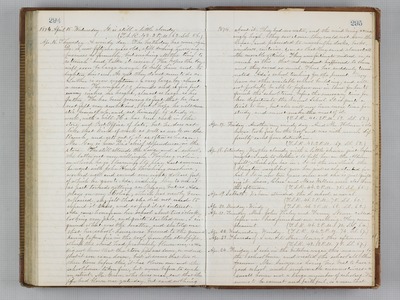 1874. April 15. Wednesday. It is still a little cloudy. (T.S.R. 42.2 P.M. 62. S.S. 56.) Apr. 16. Thursday. A windy day. The birthday has come again Dr. is now fifty one years old, still driving, hurrying in business as formerly, but wishing all the time to "retrench" and take it easier. He hopes the boys will soon be large enough to help him and to lighten his cares. As yet they do not seem to do so. Luther is now eighteen - a very large boy - almost a man. He weighs 150 pounds and is five feet seven inches in height, almost as large as his father. He has been growing so fast that he has not felt very ambitious, but I hope he will soon stir himself up, and set himself to study or work, with a will. He has been clerk in the store and Post Office of late, but he does not like that kind of work as well as work on the Ranch and gets out of it as often as he can. Mr. Gay is now D.'s chief dependence in the store. He still attends the Lodge and S. school, the latter not very willingly. He has a violin, on which he is learning to play. Last summer he went with John Kerr's threshing machine, worked well and earned over eighty dollars, forty of which he gave to Ada, wishing her to use it as part towards getting an Organ, but as Ada plays on my Eolian, which has newly been repaired, she felt that she did not need to expend it thus, and so put it at interest. Ada came home from her school about two o'clock, looking very pale, and quite startled me. I inquired what was the matter, and she told me that her school-house was burned to the ground having taken fire in the roof, from the store-pipe, which the wind had previously blown over. Ada did not know that the store pipe was down, or indeed that it ever came down, but it seems that two or three times before this it has blown over and the school house taken fire, but never before to such an extent. Mr. Green, who lives near, saw that the pipe had blown over yesterday, but said nothing 1874. about it. They had no water, and the wind being exceedingly high, they saw at once they could not save the house, and proceeded to remove the desks, books, windows, curtains, &c. so that they saved almost all the movable articles. They were fortunate indeed in so much as this - that no accident happened to them and they saved so much. Thus has suddenly terminated Ada's school teaching for the present. They have no other available school building, and will not probably be able to prepare one in time for her to finish the school term, before the necessary time for her departure to the Normal School. It is quite a trial to her, but she will now have more time for study, and must make the most of it. (T.S.R. 40.2 P.M. 69. S.S. 62.) Apr. 17. Friday. Another very windy day. And Mr. Holman's old house took fire on the roof and was with much difficulty saved from destruction. (T.S.R. 48.2 P.M. 67. S.S. 63.) Apr. 18. Saturday. Weather cloudy with a little shower just before night. I rode to Mother's to help her on the Album quilt, which she has in. It is the one which the Abington neighbors gave her just as she started for Cal. It is now ten years since and she is just quilting it. Susie, Clara and Mrs. Wallace were also there this afternoon. (T.S.R. 44.2 P.M. 75. S.S. 65.) Apr. 19. Sabbath. We have attended the S. school as usual. (T.S.R. 46.2 P.M. 75. S.S. 60.) Apr. 20. Monday. Windy. (T.S.R. 46.2 P.M. 68. S.S. 62.) Apr. 21. Tuesday. Mrs. John Haley and Fanny Nance called before we had finished our washing. They seem pleasant. (T.S.R. 46.2 P.M. 70. S.S. 64.) Apr. 22. Wednesday. Windy. (T.S.R. 44.2 P.M. 74. S.S. 67.) Apr. 23. Thursday. I went to Mrs. Mowry's this afternoon. (T.S.R. 42.2 P.M. 78. S.S. 67.) Apr. 24. Friday. I rode in the butcher wagon this morning to the school house and visited the school all this forenoon. Mr. Sawyer is doing his best to have a good school, under unfavorable circumstances - a small house and a large number of scholars. He seems to be earnest and faithful, is a man that