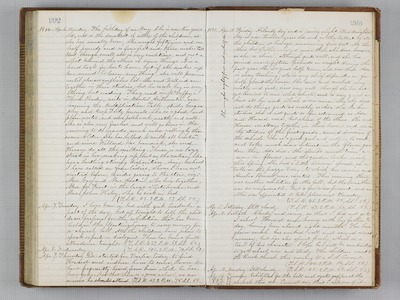 1874. Apr. 6. Monday. The birthday of one Mary. She is now ten years old, and is the smallest of either of the children, as she has usually been. She weighs fiftynine and one-half pounds and is four feet and three inches tall. But though small she is very ambitious, and not a whit behind the others in some things. It is a hard task for her to learn, but if she makes up her mind to learn anything, she will persevere until she accomplishes it. She and Willard are together in their studies but he excels her in everything but reading. They read in McGuffey's Third Reader, recite in Mental Arithmetic, are learning the Multiplication Table, study Geography and keep Daily Journals. She is a good and plain writer, and sews patchwork neatly and well. She is also very fearless, and will go alone in the evening to do errands, much more willingly than some older. She has helped to milk all winter, and since Willard has been sick, she and Horace do all the milking. There is no lazy streak in her making up, but on the contrary she has a bustling stirring disposition. Susie school I have called on four ladies, whom I have not visited before, besides going to the store, viz, Mrs. Gay and Mrs. Austin, who live together, Mrs. Jo. Frost in the large white house, and Mrs. John Haley, who is sick in bed. (T.S.R. 43.2 P.M. 57. S.S. 55.) Apr. 7. Tuesday. I have been in bed with sick headache a part of the day. Got up tonight to help the children prepare for the exhibition that has been held in the Meetinghouse to raise money for a church bell. All the children have pieces to speak or parts in dialogues. There has been a full attendance tonight. (T.S.R. 43.2 P.M. 69. S.S. 60.) Apr. 8. Wednesday. (T.S.R. 41.2 P.M. 70. S.S. 62.) Apr. 9. Thursday. Dr. started for Visalia today, to find Howard and induce him to come home. We have frequently heard from him while he has been gone. Now that there is a good school, we are anxious he should attend. (T.S.R. 47.2 P.M. 75. S.S. 55.) 1873. Apr. 10. Friday. A cloudy day and a rainy night. Our daughter Ida is now twelve years old and is the tallest of all the children at her age, measuring five feet. All the others but Luther weighed more than she does, however as she is "slim," although quite well, and she has gained nearly fifteen pounds in weight during the past year. She is a great help to me, and now that Ada is away teaching, she is my chief dependence for help about the house. She sews and crochets very neatly and fast, iron very well, though she has not yet learned to iron white shirts, and is very quick about all her work, which is one season why she does not do things quite so neatly as Ada did. In her studies, she is not quite so far advanced as Ada and Howard were, but ahead of the others. She and Horace are always together in their lessons and are in the studies of the first grade, second division of the schools. She is a good girl and willing to work, and takes much more interest in the flower garden than Ada did. She spends much time among her flowers, and the garden looks nicely this Spring. She had a "little dinner" spread on a table on the piazza today, to which her cousins and Amelia Bruml were invited. This evening there was another exhibition for the bell, but the weather was so unfavorable, but a few were present, and another was appointed to take place next Tuesday. (T.S.R. 48.2 P.M. 55. S.S. 51.) Apr. 11. Saturday. Still cloudy. (T.S.R. 47.2 P.M. 60. S.S. 51.) Apr. 12. Sabbath. Cloudy and rainy, so that I did not go to S. school. Howard came home with his father today, having been absent eight months. He has grown much, has worked well and earned much money, but has also spent freely, which is a trait of his character. I hope he will be contented to go to school now and study. The children went to the Brick Church this evening to a S. S. Concert. (T.S.R. 44.2 P.M. 54. S.S. 51.) Apr. 13. Monday. Still cloudy. (T.S.R. 43.2 P.M. 63. S.S. 53.) Apr. 14. Tuesday. Exhibition for the bell and oyster supper at the church this eve. Cannot say that I approve of it. (T.S.R. 89.2 P.M. 60. S.S. 56.)