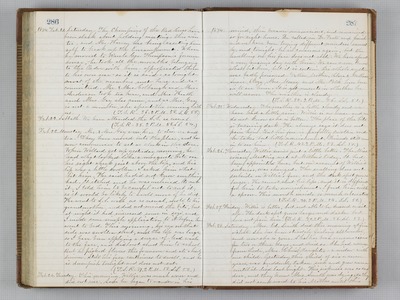 1874. Feb. 21. Saturday. The Champions of the Red Cross have been slack about holding meetings this winter, and Mr. Harvey has being exerting himself to break up the Encampment. When he moved to Uncle Geo. Thompson's former house, he took all the movables belonging to the Order with him appropriated them to his own use - so it is said - so tonight most of the members met here and reconnoitred. Mr. & Mrs. Colbaugh and Mrs. Anderson took tea here, and Mrs. Heath and Mrs. Gay also came, and as Mrs. Gay is not a member, she spent the evening with us. (T.S.R. 36.2 P.M. 58. S.S. 55.) Feb. 22. Sabbath. We have attended the S.S. as usual. (T.S.R. 35.2 P.M. 55. S.S. 54.) Feb. 23. Monday. Mr. & Mrs. Gay were here to dinner and tea. They have moved into the place, and he now commences to act as clerk in the store. When Willard got up yesterday morning, he had what looked like a mosquito bite on his right cheek just above the lip, and his lip was a little swollen. I asked him what bit him. He said he did not know anything had. It itched and he was inclined to rub it. I told him to be careful not to rub it, as it would be likely to swell more if he did. He went to S.S. with us as usual, wrote to his grandmother, and did not mind the bite, but at night it had increased some in size, and I made some simple application to it before he went to bed. This morning, his eye on that side was swollen shut, and the lip was large so I have been applying a sugar of lead wash to the face, and did not send him to school. But he picked flowers this forenoon and ate a hearty dinner. Still his face continues to swell, and he is dumpish tonight and does not eat. (T.S.R. 37.2 P.M. 58. S.S. 52.) Feb. 24. Tuesday. This morning, Willie was much worse and did not rise. Soon he began to wander in his 1874. mind, then became unconscious, and remained so for eight hours. Dr. called in Dr. Foote and Josiah and we have been trying different remedies earnestly, and tonight he is conscious again, but the swelling on his face does not abate. We have spent a very anxious day with him. We can never know what bit him, but it is certain his whole system was badly poisoned. Father, Mother, Clara & Mr. Ross Susie, Eliza, Mrs. Mowry and Mr. Polk have been in to see him. It is yet uncertain whether he will recover. The weather is cloudy. (T.S.R. 32.2 P.M. 56. S.S. 51.) Feb. 25. Wednesday. The weather is a little cloudy and we have had a little rain. Willie is no worse and we do not know as he is better. The place of the bite is turning dark. He always says it does not pain him. But his face is fearfully swollen and he takes but little nourishment. Friends still come in to see him. (T.S.R. 43.2 P.M. 53. S.S. 50.) Feb. 26. Thursday. Willie seems just a little better. The Missionary Meeting met at Mother's today. It had been appointed here, but on account of Willie's sickness, was changed. The swelling does not subside on Willie's face, and the dark spot grows larger. He cannot shut his lips, and it is difficult for him to take nourishment. I feed him with a spoon. His mouth inside is much ulcerated (T.S.R. 34.2 P.M. 54. S.S. 50.) Feb. 27. Friday. Willie is better, but not able to be dressed or sit up. The dark spot grows larger and darker but does not pain him. (T.S.R. 32.2 P.M. 56. S.S 53.) Feb. 28. Saturday. Mrs. Ed. Smith died this morning at five o'clock. She has been steadily failing all winter, and now she is gone. She has been unconscious for two or three days, and died so. She had amuse from Lodi, Mrs. Christ daughter - a widow with one child. Yesterday, this child of six or seven years, was suddenly taken sick and grew worse until it died last night. His sickness was so sudden, and they knew Mrs. Smith was dying, so they did not send word to his Mother until this