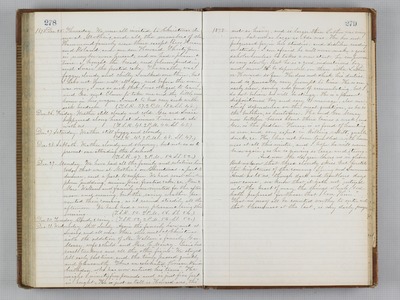 1873. Dec. 25. Thursday. We were all invited to Christmas dinner at Mother's, and all the members of the Hammond family were there except Bros. Horace and Roland, and our son Howard. Thirty four in number were present, and we had a pleasant time. I brought the bread and plum pudding and Susie the frosted cake. The weather was foggy, cloudy and chilly. I walked over there, but I have not been well all day, and before the evening was over, I was so sick that I was obliged to leave, and Geo. sent Elmer to take me and the little ones home in his wagon. I went to bed very sick with sick headache. (T.S.R. 37.2 P.M. 50. S.S. 48.) Dec. 26. Friday. Weather still cloudy and cold. Geo. and Susie happened along here at dinner time and ate with us. (T.S.R. 41.2 P.M. 44. S.S. 43.) Dec. 27. Saturday. Weather still foggy and cloudy. (T.S.R. 41.2 P.M. 48. S.S. 47.) Dec. 28. Sabbath. Weather cloudy and showery, but not so as to prevent our attending the S. school. (T.S.R. 47.2 P.M. 54. S.S. 52.) Dec. 29. Monday. We have had all the family and relatives have today that were at Mother's on Christmas - a part to dinner, and a part to supper. We had roast chicken plum pudding, mime pies, frosted cake, etc. Mr. & Mrs. Wallace and family were invited for the afternoon and evening, but the rainy weather prevented their coming, as it rained steadily all the afternoon. We have had a very pleasant sing this evening. (T.S.R. 50.2 P.M. 56. S.S. 54.) Dec. 30. Tuesday. Cloudy & rainy. (T.S.R. 52.2 P.M. 54. S.S. 52.) Dec. 31. Wednesday. Still cloudy. Again the family have met at Susie's, and all were there who met at Christmas with the addition of Mr. Wallace's family, Geo. Mowry, wife & child and Mrs. C. Mowry. Susie had roast turkeys and all the other "fixins." We stayed till early bad time, and the time passed quickly and pleasantly. Thus we celebrated Horace Manis's birthday, who has now entered his "teens." He weighs ninety five pounds and is just five feet in height. He is just as tall as Howard was, tho' 1873. not so heavy, and is larger than Luther was every way, but not so large as Ada was. He has not progressed for in his studies, and dislikes reading or study. I am afraid he will never make a good scholar unless he takes a new start, he improves so very slowly. But he is a good industrious boy, and more to be depended on than either Luther or Howard so far. He does not shirk his duties, and is generally very prompt to time. He is an early riser, saving and fond of accumulating, but I do not believe he will be stingy. He is a pleasant dispositioned boy and easy to manage, also our chief dependence on the meat question, as he is the butcher, as heretofore. He and Geo. Mowry now butcher beeves about three times a week, and Geo. is the pedlar. Horace is as fond of hunting as ever, and very expert in killing rabbitt, quails ducks, etc. He has not been troubled with hoarseness at all this winter, and I hope he will never be so again, as he is growing so large and strong. And now the old year leaves us in gloom. But we know that these cloudy skies but foretell the brightness of the coming Spring and Summer. And so to us, though dark and troublous days now come, we know that it hath not "entered into the heart of man, the things which God hath prepared for those that love Him." That we may all be counted worthy to enter into that blessedness at the last, is my daily prayer