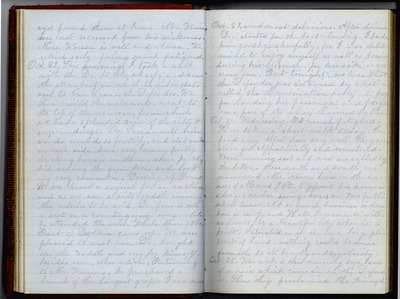 and found them at home. Mr. Warrenhas not recovered from his sickness.Mrs. Warren is well, and Anna. Weretired early, feeling much fatigued.Oct. 23. This morning I took a walkwith the Dr. to the wharf, and sawthe steamboat on which he intends tosail to San Fran. - the Defender. Wethen visited the water works, went tothe top of the reservoir, from whichwe had a splendid view of the city &surroundings. The Sacramento riverwinds around so prettily, and its bankon each side have very many prettydwelling houses on them, some partlyhid among the green trees and lookingvery romantic. Passing up FrontSt. we heard a signal for an auction,and as we saw a side-saddle amongthe articles to be sold. Dr. found mea seat in a counting room near, whilehe attended the sale. While there Mr.Burt of Drytown came up. We werepleased to meet him. Dr. boughtme the saddle and one for himself,besides some other articles, Returningto Mr. Warren's, he purchased abunch of the largest grapes I ever sawOct. 23, and most delicious. After dinnerDr. started for the boat landing, I badehim goodbye cheerfully, for I was determinedto enjoy myself as well as possibleduring his absence, for his sake as wellas my own, But tonight, we hear whatthe Defender was detained by what iscalled the Combination party, to payfor landing her passengers and freighton a part of the wharf claimed by them.Oct. 24. Wednesday, Felt much fatigued.Have taken a short walk today. Canfind any street here very well. They arearranged alphabetically and numbered.Those running east and west are called bythe letters, those north and south arenumbered, Mr. Warren lives on the cornersof M and 9 Sts. Opposite his house isa large circular swing - near are two publicschool houses, Not so much business is donehere as on J. and K sts. Sacramento will,no doubt be a beautiful city when it isbuilt. Situated as it is, on a large plaintract of land, nothing could be morefavorable to its beauty and regularity.Oct. 25. Was waked this morning by a bandof music which came in on the Defender.Thus they proclaimed the triumph