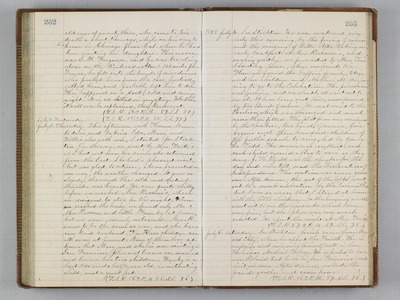 old men of seventy three, who came to his death a short time ago, while on his way to his home in Chicago from Cal. Where he had been visiting his daughters. His name was S.M. Ferguson, and he was traveling alone on the Railroad. About 100 miles from Denver, he fell into the hands of murderers who pushed him from the cars, partially robbed him, and probably left him to die. This happened on a dark, cold and rainy night. It is all clothed in mystery. Whether it will ever be explained, they know not. (T.S.R. 62. 2 P.M. 89. S.S. 81.) July 2. Wednesday. (T.S.R. 55. 2 P.M. 85. S.S. 77.) July 3. Thursday. This afternoon, with Horace Mann to drive and taking Ida, Mary and Willie also with me, I started for Stockton. On the way, we went by Mrs. Foote's as I had not seen her since she returned from the East. She had a pleasant visit, but was glad to return. As we proceeded on our way, the weather changed. It grew so cloudy, the wind blew cold and distant thunder was heard. We were quite chilly before we reached Mrs. Russem's, where we designed to stop for the night. When we reached the house, we found only Mr. & Mrs. Russem and little Franky at home, but we were warmly welcomed. Mrs. R. seems to be the same as ever, and she has a very kind husband. The Herr children are all away at present. None of them live at home but Mary and she is now visiting in San Francisco. John and Emma are married and Emma has two children. Franky is about two and a half years old, an interesting child, and a great pet. (T.S.R. 55. 2 P.M. 85.S.S. 76.) 1873. July 4. In Stockton. We were awakened very early this morning, by the firing of cannon and the ringing of bells. After taking an early breakfast at Mrs. Russem's, and saying goodbye, we proceeded to Mrs. Tea's boarding house, where our friends live. Here we found the Geffroy family, Eliza and her children and Mother, all preparing to go to the Celebration. The procession was forming, and we shortly all went out to see it. It was long and fine, accompanied by two Bands of music. We next went to the Pavilion, which was thronged and much more than filled. The platform was occupied by the speakers, two bands of music, five organs and three hundred children of the public schools to sing, led by young Dr. Todd. The music was excellent, and each child carried a flag to "wave" as they sang. J. H. Budd was the speaker for the day and - Lontitt read the Declaration of Independence. The oration was a very good one. After dinner, the rest of the folks went out to a mock celebration by the "Invincibles", but I was so weary that I stayed at home with the little children. In the evening we all went out to see the fireworks which were very fine, but the place was very much crowded. We spent the night at Mrs. Tea's. (T.S.R. 57. 2 P.M. 89. S.S. 75.) July 5. Saturday. In Stockton. Josiah came from Merced City, where he spent the Fourth. He is enjoying and improving himself well in San Francisco Medical College. We expected to have seen Roland but he is in San Francisco - will visit us soon. After dinner, we bade the friends goodbye and came home. (T.S.R. 56. 2 P.M. 87. S.S.76.)