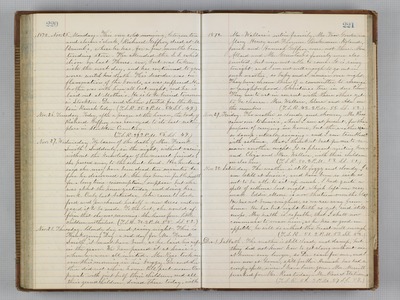 1872. Nov. 25. Monday. This very cold morning, between ten and eleven o'clock, Richard Geffroy died at Mr. Bruml's, where he has, for a few months been tending store. He attended the S.S. exhibition on last Thurs. eve, but was taken sick the next day, and has continued to grow worse until his death. His disorder was inflammation of the bowels, as was supposed. His brother was with him all last night, and he is laid out at Mother's. He is to be buried tomorrow in Stockton. Dr. and Luther started for the Mountain Ranch today. (T.S.R. 28. 2 P.M. 54. S.S. 49.) Nov. 26. Tuesday. Today, after a prayer at the house, the body of Richard Geffroy was conveyed to its last resting place in Stockton Cemetery. (T.S.R. 29. 2 P.M. 56. S.S. 49.) Nov. 27. Wednesday. We learn of the death of Mrs. Frank Smith. Suddenly, in the night, without warning without the knowledge of her nearest friends, she passed away to the silent land. Her husband says she may have been dead ten minutes before he discovered it. She has been in feeble health for a long time consumption I suppose - but she was about the house yesterday, and doing her work. Only last Saturday, she came to Lockeford and purchased herself a new dress and engaged it to be made. To the last, she would affirm that she was recovering. She leaves four little children motherless. (T.S.R. 30. 2 P.M. 55. S.S. 52.) Nov. 28. Thursday. Cloudy day and rainy night. This is Thanksgiving Day - a sad day for Mr. Frank Smith, it must have been, as he laid his wife in the grave. We have passed it at Susie's, where we were all invited. Mr. Ross took me over this morning in his buggy. Dr. and Luther did not arrive home till past noon. Our parents, with just half their children, and all their grandchildren, dined there today, with 1872. Mr. Wallace's entire family, Mr. Van Gorder and Mary, Henry and Florence Brakeman. Roland, Josiah and Hannah Geffroy were not there. Mrs. Allard and Mr. Greenlaw's family were also invited, but were not able to come. It is rainy tonight, and I am not well enough to go out in such weather, so baby and I remain over night. They have chosen three of a committee to arrange a neighborhood Christmas tree in due time. They are to act in concert with three others yet to be chosen. Mrs. Wallace, Clara and Ada are the members. (T.S.R. 42. 2 P.M. 55. S.S. 52.) Nov. 29. Friday. The weather is cloudy and showery. Mr. Ross came over to Susie's, where I am at present, for the purpose of carrying me home, but the weather is so damp - actually raining - and I am troubled with asthma, that I think it best for me to remain another night. It is pleasant visiting here and Eliza and Mrs. Wallace, with their children are also here. (T.S.R. 50. 2 P.M. 53. S.S. 51.) Nov. 30. Saturday. The weather is still foggy and cloudy. I am still at Susie's, and have been so sick as not to be able to sit up much. I had quite a spell of asthma last night, which left me very weak. Eddie Moore is now thirteen months old. He has not been weighed, as we are away from home. He has but eight teeth as yet, and still creeps. My health is so feeble, that I shall now commence to wean him, as he has so good an appetite, he will do without the breast well enough. (T.S.R. 51. 2 P.M. 53. S.S. 52.) Dec. 1. Sabbath. The weather is still cloudy and damp, but they did not know how to get along without me at home any longer, so Dr. came for me, and I am now at home, still feeble. Hannah has had a croupy spell, since I have been gone. Mr. Merritt preached for Mr. Ross today. Mr. Ross at Station. (T.S.R. 51. 2 P.M. 57. S.S. 53.)