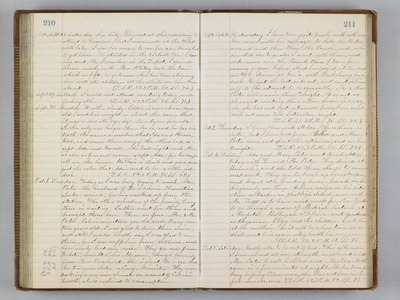 1872. Sept. 28. Saturday. Sac. City Dr. went out this morning to attend to business, but I remained at the Hotel with baby. I was too weary to care for anything but to get home. We started in the 2 o'clock train, having met Mr. Greenlaw in the Depot. I arrived home nearly sick. Mrs. McStay took the train which we left, to go home. She has been staying here with the children all the while we have been absent. (T.S.R. 52. 2 P.M. 80. S.S. 74.) Sept. 29. Sabbath. I could not attend meeting today, not feeling able. (T.S.R. 52. 2 P.M. 86. S.S. 78.) Sept. 30. Monday. Weather cloudy. Eddie is now eleven mos. old, and his weight is about the same that it was a month ago, viz: twenty one pounds. Luther only was larger than he is, and he has six teeth, the same number that Ida and Horace had, and more than any of the others had, except Ada and Howard, who had eight each. He is also as forward as any except Ada, for he creeps all over the house. His hair is thick and good, and just the color that Ada's used to be a little reddish. (T.S.R. 54. 2 P.M. 75. S.S. 69.) Oct. 1. Tuesday. Today as I was busy trying to wash, Mr. Porter the husband of Dr.'s cousin Clementina Locke arrived, having walked up from the Station. The other members of the family being there in waiting, Luther went for them and brought them here. There are four- Mr. & Mrs. Porter- Calvin- nineteen yrs. old, and Mary- seventeen years old. I was glad to have them arrive, and still I could hardly say I was glad to see them, for I am suffering from asthma, and have nearly last my voice. They are now from Webster, near St. Louis, Missouri, though formerly from New England. She is about Dr.'s age, and he ten years older a Cong. Minister. They come seeking a warmer climate on account of Calvine's health, who is reclined to consumption. (T.S.R. 52. 2 P.M. 74. S.S. 70) 1872. Oct. 2. Wednesday. I have been quite poorly with asthma Geo. came with his carriage to take the Porters around and show them the Ranch, and as he invited me to go also I went with them, and rode more over the Ranch than I have for many a year before. And I enjoyed it too, and we took dinner at Geo.'s with Tark Soong for a cook. He put the best side out, and exerted himself to the utmost to be agreeable. Mr. & Mrs. Porter will remain there tonight. It is not so pleasant visiting there when Susie is away, for she has not yet returned from Sac. and will not come till Saturday night. (T.S.R. 45. 2 P.M. 76. S.S. 72.) Oct. 3. Thursday. I have been sick all day. The asthma is better, but I have had fever. Mr. and Mrs. Porter came and spent the afternoon and are here tonight. (T.S.R. 50. 2 P.M. 80. S.S. 74.) Oct. 4. Friday. Ada and Mary Porter went to Stockton today with Dr. and Mr. Porter. They dined at Hannah's and she told them she is to move next week. They are to break up house keeping and board at a boarding house. Josiah and his family are there. He has resigned his situation as teacher in the High School, and with Mr. Todd is to leave next week for New York to go through a course of Medical lectures at a Hospital Bellevean I believe and graduate as Physician. Eliza and the children are to live at her mother's. So it will be a long time ere we shall meet him again. My health is very poor. (T.S.R. 52. 2 P.M. 81. S.S. 76.) Oct. 5. Saturday. Hardly able to be out of bed. This afternoon I summoned all my strength and went with Mrs. Porter to call on Clara and Mrs. Ross. Mother came in a few minutes at night. She has been so busy helping Clara move, she has not been in before. Susie has come. (T.S.R. 52. 2 P.M. 84. S.S. 78.)