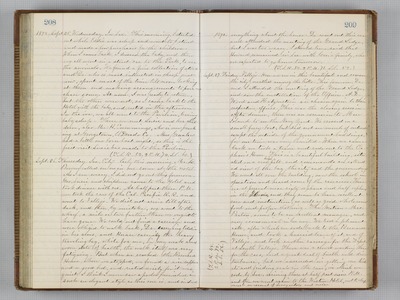 1872. Sept. 25. Wednesday. In Sac. This morning , I started out while Eddie was asleep and went to J street and made a few purchases for the children. When I came back, I dressed the baby, and then we all went in a street car to the Park, to see the animals. We found a fire collection of stock and Dr. who is most interested in sheep just now, spent most of the time till noon looking at them and making arrangements to purchase some. At noon, I was ready to return, but the others were not, so I came back to the Hotel with the baby, and rested in the afternoon. In the eve, we all went to the Pavilion, leaving baby asleep. Then we met Susie and her children, also Mr. H. Cummings, who is now preaching at Georgetown, ElDorado Co. Mrs. Green law had a little one born last night, so this is the first visit Susie has made to the Pavilion. (T.S.R. 52. 2 P.M. 72. S.S. 60.) Sept. 26. Thursday. Sac. City. Early this morning, Mr. B. Bowen called on us in our room at the Hotel. As I am weary, I did not go out this forenoon. Geo. Susie and children came to the Hotel and took dinner with us. At half part three P.M. we took the cars of the Cal. Pacific R. R. and went to Vallejo. We did not arrive till after dark, and then, by mistake, we went to the wharf, a mile or two farther than we ought to have gone. We could not find a carriage and were obliged to walk back, Dr. carrying Eddie in his arms, and Horace carrying the heavy traveling bag, while for me, in my weak and worm state of health, the walk itself was very fatiguing. But when we reached the Bernard House, where we stopped, we found a nice supper and a good bed, and rested nicely, for it was quiet. I think I never saw a parlor furnished in such as elegant style, as this one is, and indeed 1872. everything about the house. Dr. went out this eve and attended the meeting of the Grand Lodge, but I was too weary. I should have said that Howard remained in Sac. with Geo.'s family, who are expected to go home tomorrow. (T.S.R. 50. 2 P.M. 71. S.S. 52.) Sept. 27. Friday. Vallejo. Here we are in this beautiful and romantic city, nestled among the hills. This forenoon, Dr. and I attended the meeting of the Grand Lodge, and saw the installation of the Officers. A. D. Wood and Katzenstein are chosen again to their respective offices. This was the closing session. After dinner, there was an excursion to Mare Island to see the Navy Yard. We crossed on a small ferry - boat, but did not see much of interest except the outside of the government buildings, for our time was very limited. When we came back we took a team and rode out to the Orphan's Home. This is a beautiful building, situated on a very high hill, and commands an extended view of the bag, the city and the surrounding. We went all over the building, saw the school in operation and heard some of the exercises. There are at present near sixty orphans and half orphans in the Home, and they seem to have excellent care and instruction, as well as good whole some food and proper clothing. The matron - Mrs. Paxton, seems to be an excellent manager, and very economical in her way. We had a pleasant call, after which we rode back to the Bernard House, and took a hurried leave of it, and of Vallejo, and took another carriage for the Depot at South Vallejo. There was a crowd waiting there for the cars, and a great deal of bustle and disturbance, but we succeeded in getting our tickets and finding seats in the cars, in which we rode to Sac, arriving there at half past nine P.M. and then we went again to the Western Hotel, not to sleep much, on account of musquitoes and noise. (T.S.R. 48. 2 P.M. 72. S.S. 56.)